I’m a sucker for non-traditional narrative forms. If you really want to get my attention, tell your story in a fashion that doesn’t rely on the first- or third-person limited point of view. That can mean the epistolary novel, based on correspondence, diary entries or other documents (or Flowers for Algernon’s progress reports). Or Dos Passos-influenced novels that intermix factual-seeming documents with nonlinear narrative, such as John Brunner’s Stand on Zanzibar, Joe Haldeman’s Mindbridge, Frederik Pohl’s Gateway or Kim Stanley Robinson’s 2012. Or mosaic novels that are built up from several distinct, standalone pieces.

At their best, non-traditional narrative forms are all about verisimilitude and subtext. Verisimilitude, or believability, can be greatly enhanced by a story that sounds like a work of nonfiction, like a piece of long-form journalism that comes from an alternate reality in which these things are actually true. (See, for example, Catherynne M. Valente’s “Buyer’s Guide to Maps of Antarctica,” told as a series of auction catalogue items, or Howard Waldrop’s “Passing of the Western,” which collects reviews of movies about a fantastical event.) But what really drives stories like these is subtext: what isn’t on the page. Neither of the stories above say outright what they’re about. In Jo Walton’s Among Others, told in the form of a 16-year-old girl’s diary entries, the story’s most momentous, traumatic events have to be inferred from what the protagonist pointedly does not talk about. And The Islanders, the most ambitious of Christopher Priest’s Dream Archipelago books, takes the form of a travel guide to the Archipelago’s various islands: many of the entries are in themselves bracingly normal, but taken as a whole, the many unexplained contradictions between each entry paint a deeply uncanny portrait. Whatever the precise form these stories take, the reader is expected to do some of the work: the story does not tell itself, at least not completely and certainly not straightforwardly; we’re supposed to figure the rest of it out. 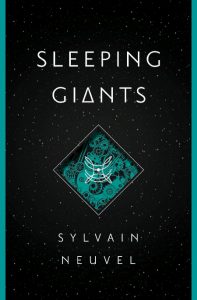 Which brings me to the Themis Files, a trilogy of science fiction novels by the Montreal-based linguist Sylvain Neuvel. Two books have seen print so far: Sleeping Giants (Del Rey, April 2016), and Waking Gods (Del Rey, April 2017). Both are entirely made up of documents—interviews, transcripts, recordings, journal entries, news articles—organized into “Files” rather than chapters. Hence, presumably, the name of the series. (A third book, Only Human, came out in May 2018.) Now, given my enthusiasm for books organized in this fashion, you’d think I’d be all over this series. And you wouldn’t be far wrong: that structure got my immediate attention. It sounded, as I’m wont to say, neat.

Sleeping Giants is the story of the discovery of an ancient alien artifact told somewhat indirectly through these files. As a child in South Dakota, Rose Franklin stumbles across a giant hand. As an adult, she is tasked with leading a project to recover the other pieces of what turns out, once assembled, to be a giant, 200-foot-tall alien robot of incredible destructive power. Joining her are U.S. Army helicopter pilot Kara Resnik and Québécois linguist Vincent Couture, who are soon dragooned into figuring out how to operate and pilot this killer robot of unknown origin, which comes to be known as Themis. The plot unfolds largely through transcripts of interviews conducted by a mysterious and colourless person about whom very little is known but whose power to operate in the shadows appears to be limitless, and whose machinations appear to be aimed at keeping the world from tearing itself apart over the robot while keeping it out of the wrong hands (as he defines them).

Waking Gods takes place several years after the first book, and opens with the sudden and unexpected appearance of another giant killer robot in the heart of London. Themis, piloted by Resnik and Couture, is at the core of the new Earth Defense Corps, and after years of public relations tours and research is finally pressed into the fray. As before, no one knows what is going on: not the resurrected Franklin, who leads the Corps, not even the anonymous Interviewer. Things go badly. Millions die, and the matter of finding out where all these robots came from and how to make them stop killing everyone and go away becomes a matter of extreme urgency. 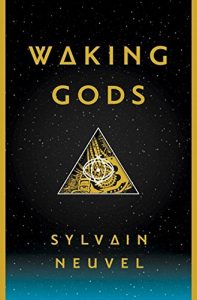 The interviews form the bulk of the narrative; the story’s action takes place in the spaces between, as it should be in a story using this structure. At least at the beginning, this has considerable narrative effect. Our characters are operating in the dark, partly because so little is known about the giant death robot, partly because they are being kept in the dark, both by the Interviewer and forces even more powerful than he is. The Interviewer’s tone is level, even and thoroughly humourless, with absolutely zero affect—in diametric opposition to the global freakout taking place around him, as governments come to terms with the existence of a 6,000-year-old giant death robot. That too, has an impact. That clinical, latter-of-fact tone is also effective when dealing with events that are traumatic or even deeply horrific, particularly during a scene where the order is given to perform a grisly surgical procedure.

But this is not the same as subtext. We see the characters getting ready for something, or cleaning up after something, or doing their best to explain events that the novel has chosen not to dramatize directly. This is an exercise in telling rather than showing: the book explains after the fact instead of inviting the reader to fill in the blanks. It’s indirect and roundabout, but it’s straightforward.

And in the end it’s unsustainable. Toward the end of Sleeping Giants we start to see a shift in the files from debriefings to mission logs: real-time transcripts where there is a lot of noise and shouting in the background. This continues and worsens in Waking Gods, whose narrative structure becomes even more precarious as the events they depict become even more intense and chaotic, and all pretence of reserve and self-control evaporates away.

The problem is that a narrative structure like the one Neuvel uses in this series is all about subtext and mystery, whereas the plot of the Themis Files is one of revelation. This is a method for concealing secrets, not revealing them. There’s a lot going on behind the scenes and between the lines. But for it to work some mysteries must remain mysteries. You cannot explain too much. Once you’ve done that—at a crucial point two-thirds of the way through Waking Gods, for example, we discover who the Interviewer is, or at least as much as we’re ever going to know about him—then you’re done. The artifice loses its storytelling power and becomes mere artifice. The more the reader knows, the less effective the form becomes.

There are risks to attempting a atypical narrative form, risks that compound themselves in longer works. There’s a reason we see narrative experiments more often in short fiction; that Neuvel has attempted an entire trilogy this way, not just a novel, is absolutely audacious. And it’s not to say that there’s no value in how Neuvel tells his tale. Voice matters. Style matters. Whatever I may have to say about the structure of these narratives, the characters—particularly the Interviewer—are engaging and the plot just zips along. But I can’t help but feel that had these books been written in a more straightforward, third-person manner—that default science-fictional voice—they would have been a lot more ordinary. But they weren’t, and they’re not. These books are proof that even in our field, which often disparages style in favour of idea, the execution of that idea—how you tell that tale—does in fact matter.