Remember when you died, Catherine?

Remember when you died, Catherine?

We were sitting on the porch, enjoying the sunlight. I thought you’d fallen asleep. The reflections from the stained-glass ornaments hanging from the porch roof made coloured patterns on your face. I remember smiling and deciding to let you sleep. The smell of hydrangeas was everywhere. It was nearly an hour before I realized you were gone.

I remember that house. We saw it when we drove through New Brunswick on the way to your dad’s funeral. We always said we’d buy a house like that someday, but the money was never there. Then you had your accident and I had to leave my job at TransDimensional right when they needed me most.

It doesn’t matter. The house was never that important. It would have been nice, is all.

It doesn’t matter. The apartment was good enough. You were always travelling, anyway, going from one job site to another. Remember that explosion at the lab in New Mexico? I wanted you to quit, but you were back to work the same day the hospital discharged you. And then you left it all behind to take care of me — do you regret it? 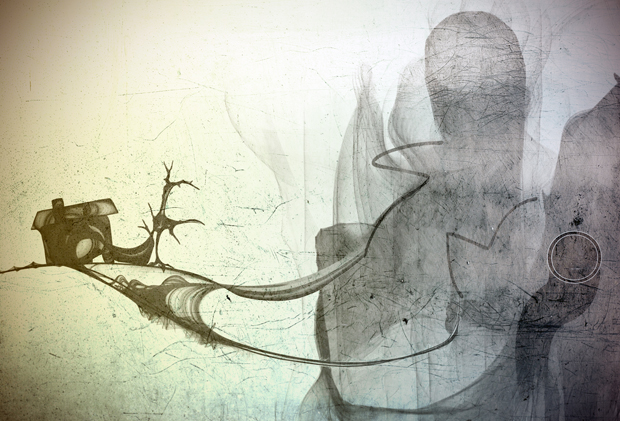 The only thing I regret is the accident. You shouldn’t have gotten in that car.

It was late. I was tired. I took the corner too fast.

You didn’t get in the car.

I did. There was too much snow, and I went too fast—

You didn’t go. I asked you not to. I said it was snowing too hard, so you stayed home.

I stayed home. It wouldn’t have mattered anyway, of course. The road was closed.

… The road was closed. Yes.

It’s a good thing. I could have been hurt. Not that you’d have noticed. You were never home. You probably wouldn’t have come back even if I’d died.

But Tim, I quit my job to look after you … I think. No. There was no accident, was there? You didn’t go.

I stopped driving years before that, actually. When gas got so expensive. I sold the car. You were so angry at me, when you got back from Denver or wherever you were.

I could never stay angry at you. I used to take time off work to be with you even in the middle of vital research. I used to cut site visits short to come home. They said the explosion was my fault. That’s why they fired me.

It was just as well, I guess. You were never happy there.

Anyway, we had each other, Tim. I didn’t mind that I couldn’t get work after university. The market for engineers was pretty saturated. You were trying to make a living drawing sketches for tourists. I waited tables and bagged groceries. And I always loved you. You know that, don’t you, Tim?

Of course I do. You made everything magic. Remember that street in Paris, when the rain made the streetlamps float like the lights of ships, and we walked adrift through a sea of buildings—

I never went to Paris, Tim. I decided to finish my degree instead. I was going to be an engineer, can you believe that? Me, an engineer.

I burned your letters. I was so angry at you for leaving.

I know. That’s why I came back so soon. I’d only been gone ten days and I knew I’d made a terrible mistake, and I sold my laptop for a ticket home.

What would I have done in Paris? I was never really much of an artist. I just liked to pretend.

You used to show me your drawings, remember? At Corrington High, before we dropped out. You’d always sit in the back of the classroom and scribble in your notebooks. I used to think you were so studious, until I looked over your shoulder and saw you drawing naked ladies and trees and things.

I was practising. It mattered to me then. I don’t know why.

Only you did. I had such a crush on you. I thought you were the prettiest girl in the class. I didn’t think you knew I existed. I was so surprised when you asked me to the end-of-year dance.

I was going to ask you to that dance. I don’t know why I didn’t. Changed my mind, I guess.

You always did. Just like your parents. They were always moving. You came to Corrington in spring, the one new kid in the class, and I’d stare at you and stare at you. You moved so quickly. I thought if I looked away you’d flicker out and vanish.

We were going to move to Corrington. I remember my dad talking about it. But then the job he was going to get fell through, just like always, and we stayed where we were — oh — I don’t remember where that was. I just don’t remember.

… Do you remember when we met, Catherine?

Born in Ontario, Grace Seybold has spent the last decade living in Montreal. Her work has appeared in Chiaroscuro, Beneath Ceaseless Skies, Neo-opsis, the Tesseracts Twelve anthology, and elsewhere.