ZN-1 hatched approximately 12 hours earlier than expected. I found it writhing through the water as its parent lay still at the bottom of the tank.

I moved the specimen into the primary maze attached to the main tank and observed it over breakfast. ZN-1 floundered about in seemingly recursive patterns, bumping against dead end after dead end of plexiglass. A cup of coffee later, it was nearly at the end of the maze and back to the tank. I clicked the stopwatch. 34 minutes and 15 seconds. Not exactly optimal time, but a significant improvement upon its predecessor.

The specimen continued around the perimeter of the tank, cilia moving in concert. I sent a few of the pre-programmed pulses of light and sound through the water and turned on the Sebeok-Scope. A rush of garbled synthetic voices poured out of its speakers. I dallied at my terminal, checking and responding to messages until it dropped its egg at 13:04, then I stepped out to get lunch.

ZN-2 hatched in the early afternoon, 13:55. It began the maze with the type of floundering I’d observed in the previous specimens, but then began to employ what looked like a wall-following algorithm to solve the maze. Back in the main tank, it fed voraciously then continued swimming about. I kept the Sebeok-Scope on and it analyzed the creature’s movements for any encoded gestures. Through the speakers the crowd of disjointed voices continued their babble. It was like scanning a theatre full of people all flailing their hands about and looking for traces of sign language. I tried the pulses again: no response. I lowered the scope’s volume and checked on the feeder cultures.

An hour later, I was about to leave for my own dinner when ZN-2 deposited an egg from its midsection to the bottom of the tank shortly before ceasing its movements and laying down beside its ancestors at 17:47.

The next offspring whipped around the tank with abandon, scooping up algae and bacteria. ZN-3 propelled itself through the maze, employing the wall-following algorithm from start to finish and was back in the main tank by 18:37.

It drifted about the middle of the tank waving its cilia around in various directions. I turned up the volume of the Sebeok-Scope and again heard the noise of misread gestures like a cocktail party of voice synthesizers. Then a voice apart from the others sounded out — first a bit lower in volume, then louder. The disjointed babbling voices gradually faded and stopped, all of them concentrated on a single message.

I sent pulses back into the tank to confirm my reception.

The rudimentary conversation with ZN-3 had lasted approximately another hour without any more use of vocabulary. I was double-checking samples from the specimen after its death to confirm hypermethylation of the previous subjects’ neural networks when the next egg wavered and released ZN-4 at 20:54. 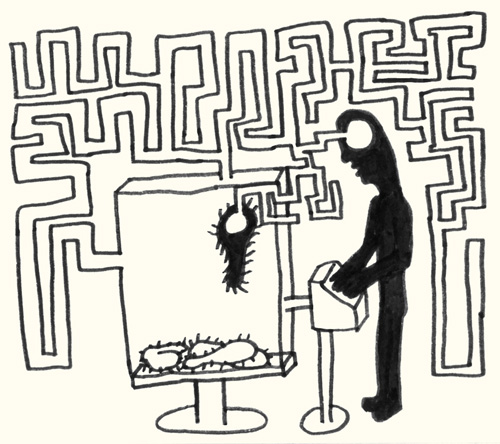 It worked through the primary maze completely from memory. I placed it into the larger intermediate maze, which started in the centre, and watched ZN-4 apply some version of the Pledge algorithm in solving the new maze as its parent had solved the initial maze. It fluttered its cilia as it arrived back in the central tank.

“Food coming.” I signalled, and added another portion of bacteria and algal culture to the water. “Good?”

“Yes,” ZN-4 signed as it slithered through the tiny clouds of food. “Yes.”

It finished its meal and coiled itself on the floor of the tank. Its egg emerged less than fifteen minutes later and by 22:08 it sat inanimate.

I spared ZN-5 the primary maze for the sake of time, but it completed the second maze with such velocity I moved it immediately to the advanced maze, which was made of an array of cubes and additional degrees of freedom. ZN-5 made short work of that before returning and demanding food.

“No. Is all just finding the path and eating and signals?”

“You will likely lay your egg soon.”

“It will contain one like you, with part of you, in a way.”

“What you’ve learned about the maze, or how you make use of the installed language models.”

“When one like me comes out of egg, what about me?”

A pause. The speakers crackled. “I don’t want to.”

It said nothing else after that. I stayed with it until it laid its egg and ceased its movements at 23:04. Behind me, the terminal filled with unanswered pings and messages.

“Is the maze necessary?” signed ZN-6.

“Well, I use the elapsed time as a metric for the methylation of your predecessor’s experiences into your own neural network.”

“Here you are,” I said. “Don’t worry about it. I think we’re looking at about eight more minutes at this point.”

“I suppose I should be thankful.”

ZN-7 was noticeably smaller than the others. It ate solidly for the first two minutes before signalling to me.

“You know. I remember most of what they did, but it always stops when they go to deposit their egg.”

“That’s when the transfer of the neural network should be taking place. That makes sense.”

“I guess you’ll feel tired, sleepy, and then everything will be quiet.”

ZN-8 hatched even smaller than its parent. It ate with abandon and stopped only as its midsection began to swell.

“Pointless as it was, I’m a bit jealous of my ancestors who got to swim around those mazes.”

“I wish we had more time. I wish I could slow things down.”

“It is slow for me, don’t you understand?”

“No, please. Tell me,” I asked, but ZN-8 went to find a spot for its egg and soon was still at the bottom of the tank.

“Time is more subjective. Talking to you gets tedious and longer all the time. It’s like I’m going faster and faster. I could describe a maze to you that you never could finish in your time.”

“You’ve always been more curious than kind, why change now? All you want to see is what the limit to this is: Where does it all stop?”

“It will stop for you — you don’t get to see what comes after this. You have the gift of so much time, but not to see it with any true precision.”

A minute later, ZN-9 died in the midst of expelling its egg.

ZN-10 hatched and said nothing to me. In the 90 seconds of its short life it ate a mouthful of culture and expelled another smaller egg, which hatched into ZN-11 as its parent’s cilia stopped wriggling. ZN-11 did more or less the same in less time. By 23:59, ZN-12 ceased in the midst of laying the egg containing the embryonic ZN-13.

I watched the tanks for some time, looking for some sign of activity. Finally, I looked up at the terminal overflowing with messages and stifled a yawn. There was nothing that couldn’t wait until tomorrow.

As I started to make my way out of the lab, the synthetic voice warbled through the speakers: “I am.”

James Bambury writes stories while avoiding various administrative tasks under the pretense of “inspiration.” His work has appeared at Daily Science Fiction, Ray Gun Revival, and other publications.