John Gunn crept down Fumblers Alley all jagged nerves and awkward stealth. He hadn’t slept a wink in a week. He had kept himself awake with hits of pirate nicotine and splintery, shivery adrenaline.

John Gunn crept down Fumblers Alley all jagged nerves and awkward stealth. He hadn’t slept a wink in a week. He had kept himself awake with hits of pirate nicotine and splintery, shivery adrenaline. He knew that if he slept he would lose the tune, that better-than-certainty, that unthinking faith in the world. If he let himself fall asleep he would wake up late the next morning hung over, groggy and miserable, with nothing but fragments of random sound in his head. Nothing would be worth doing any more. Who knew how long the depression would last this time?

But for now, drunk on too much wakefulness, it couldn’t touch him. For now, everything was worth it. The line between thought and action was so thin that it was hardly worth distinguishing any more. The little pseudo-song pulsed in his ears, like a heartbeat.

The streetlights were all burnt out in Fumblers Alley. It was a notoriously magical place. They said you could only find it when you were in the right state of mind — like Narnia, like love — and Gunn understood that it was destiny that had led him here, now, tonight. He liked the idea of destiny. It made sense to him. It turned his life into something meaningful. But destiny was like Fumblers Alley — you could only find it and believe in it at times like this, when the music was playing.

Fumblers Alley was also notoriously dangerous, and Gunn felt brave and streetwise just by being there. Art addicts and sneaksmiths hung about in the entrances to the shadowy cellar bars. Muses — men in muscle shirts and tight, silk trousers — stared aggressively, daring him to approach, but Gunn ignored them, slipped past like a shadow, as if he were one of them, as if he were used to all this, as if he always came to Fumblers Alley. 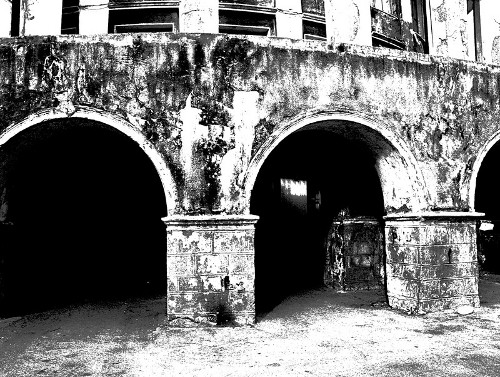 All it would take, to make the night catch and sparkle, would be one other person in a similar state of mind, one person who wanted to make a connection, someone else who believed in destiny. It wasn’t about sex. It could be anyone, someone with a bright smile and a taste for adventure. Someone who would walk the city streets with him and teach him to see them differently. Someone he might end up kissing, or going skinny-dipping with. Or perhaps even singing to.

The mugger was irresistible, did not give Gunn a chance to think. He came at him like gravity. He slammed Gunn against a wall and pinned his arms with big, meaty fists, threw shouts at Gunn’s face: “Gimme your wallet. Gimme your mothafuckin wallet.” He spoke with a calm, loud anger. There was a terrifying confidence in the way he ordered Gunn to do what he wanted him to do. “Give it to me. Give it to me. Give it to me.” Unbearable proximity reduced Gunn’s world to the man’s sweaty, ugly face. He saw irrational need in the man’s eyes.

Afterwards, Gunn would imagine all the things he should have done, knees to the crotch, eye-gouges, screams that burst the man’s eardrums. He would fantasize about super powers, about turning his body electric, watching the man writhe in pain and drop to the ground, a charred and smoking corpse, about stopping the man’s breath with a wave of his hand. He hated the man so much it made him physically sick. If he could have tortured the man to death, he would have.

All he could do — literally all he could do — was reach into his pocket and give the mugger his wallet. It was as if the man took away his free will and was working him like a puppet.

The mugger vanished, lumbering into the darkness with a disdainful lack of hurry, leaving Gunn crumpled on the curb, like an empty bag of chips, stealthy and streetwise no longer. He was on the verge of tears, an overtired little boy. It was in that state that Lucy Much found him.

“Should we give an ‘are you okay?’?” she asked her companion.

“Nah. There’s nothing we can do for him.”

“I think we should stop. Something’s really wrong with him.”

Then Gunn felt a warm hand on his shoulder. “Are you alright?”

“I think I just got mugged,” Gunn blubbered, embarrassed by his words immediately. What did he mean, I think?

“Oh fuck, that’s terrible. Poor thing. C’mon, you’re shivering. On your feet. I’ll buy you a hot drink. What do you say? Coffee?”

Fiddlington’s on Fumblers served all-night breakfast. Its entrance was dark, like all the entrances to all the establishments on Fumblers Alley, and Gunn would never have dared approach it on his own, but Lucy led him through into the busy, bright interior. They sat in one of the cork-leather booths and Gunn let the warmth and light and noise of the place slowly repair him. He basked in the wash of conversation and the waitress’s bored friendliness.

They drank hickory coffee and Lucy offered Gunn a nutmeg cigarette. “So what are you doing in Fumblers Alley anyway?” she asked. “You’re not a local. On the prowl for some art? A little bit of music maybe?”

Gunn considered how he should respond to this. His sleepless confidence was gone, and it was no longer clear to him why he had come to this dangerous part of town. It now seemed stupid and rash. “No. Not art,” he said. “Curiosity, I suppose.”

Gunn wanted to protest, but anything he said would only prove her point, so he just shrugged. “You’re local yourself?”

“Transplant from Garricktown, but I’ve lived here since I was a teenager. So yeah, local I guess.”

“I’m a singer.” The word seemed to fall into a silence, as if all the other patrons had paused to draw breath at the same time, two-dozen conversations hesitating all at once. Lucy, however, seemed unconcerned.

Gunn glanced around nervously and Lucy laughed at him again. “Don’t worry,” she said, “the Enforcers only raid this place on Friday nights. Nobody here cares.” She even hummed a little melody out loud, delighting in Gunn’s panic. “See?”

“A singer?” Gunn whispered. A shiver of excitement passed through his flesh.

Lucy nodded and sipped her coffee. “Licensed. Officially, I only do little rehab-strength ditties to wean rich addicts off the stuff. But of course I do harder gigs too. You can’t live off what Social Services pays.”

“A double-agent? Like they’re always raving about in the papers?”

Lucy grinned: “Yep. Your tax dollars at work training hardened criminals. That’s me. Of course they don’t train shit. I knew how to sing before the Services hired me. We all do. The suits are all idealism and moral outrage, but the boots on the ground are much more down to earth. You think my Reporting Officer doesn’t know about my gigs?”

“How do you sleep at night?” asked Gunn. Lucy rolled her eyes and motioned for the waitress. “No, no,” said Gunn, realizing how it must have sounded. “I don’t mean it like that. I mean … well … I get a song stuck in my head sometimes. I can’t sleep. At least I think it’s a song.”

“Aha,” said Lucy. “So the truth comes out. I’m not gonna hook you up, buddy. I know you don’t have any money.”

“No. I’m not an addict. I’ve never even listened to music, really. I wouldn’t recognize it if I heard it. But I get notes stuck in my head sometimes. A part of a song, I think. Or something. I don’t know where I got it. Maybe I made it up. It’s never more than a few sounds. But they feel like they’re going somewhere. You know? Like they have a direction.” He was babbling now, but destiny had his tongue. It was too late to stop. “They make me feel like something exciting is about to happen. I can’t sleep. I don’t want to. Sleep kills it, that little melody. In the morning it’s just a sequence of sounds, all the life gone out of it. So I don’t sleep. I walk around the city, waiting for something to happen, seeing where it leads me, because something has to happen, I can feel it. I can hear it coming. That’s why I ended up here, in Fumblers Alley. And I think that’s why I met you.”

Lucy rolled her eyes again. “I’ll tell you what happened, honey,” she said. “You got fucking mugged, that’s what. You ought to go to the police, report your stolen wallet, then go home and go to bed. You’ll feel better in the morning.”

“No,” said Gunn. “I’ll feel worse. That would end it. Don’t you see? You’re where the notes were leading me all along. A song brings me here, to Fumblers Alley, and then I meet you, a singer. We were supposed to meet tonight. Something is supposed to happen between us.”

Lucy stared coldly at him, but then she took a sip of coffee and when she looked up again her eyes had softened.

“No,” she said, gently. “That’s just how music sounds, honey. Listen to a song a few times and it tricks you into thinking each note is inevitable. How do you think your mugger felt? But it’s just a sham. Life doesn’t work that way.”

Gunn had fallen asleep across the plastic table and when he woke up Lucy was gone. She hadn’t paid for his coffee, and he found himself stammering and pleading with the waitress, his excuses ringing false, even in his own ears.

The sun was coming up by the time he emerged into Fumblers Alley, leaving promises and apologies at Fiddlington’s. The muses, art addicts and sneaksmiths were all gone, replaced by workers walking briskly in the morning chill with lunchpails in hand. Gunn couldn’t tell where the mugging had taken place. The alley was a dull, undifferentiated stretch of gray, in which it was difficult to imagine anything magical or dangerous happening. It was difficult to imagine having met Lucy. The fragment of melody that had brought him to Fumblers Alley was gone from his head.

As he made his way home, hurrying against his own exhaustion, Gunn thought not of Lucy, but of the man who had taken his wallet. Perhaps the mugger’s head had been full of the inevitability of song as well. Perhaps he had been in the grip of something larger than himself, forced to act against his will, just as he in turn had forced Gunn to give him his wallet.

As he fumbled for his house keys, Gunn came across a business card, loose in his coat pocket: “Lucy Much — Rehabilitation Services.” On the back, handwritten in messy pen: I believe you have a low-level melody dependency — if you’re interested in getting better, give me a call.

And there it was, back in his head, that divine inevitability.

Julian Mortimer Smith has worked as a bookseller, a university teaching assistant and a military clarinetist. He currently lives in a small lobstering village in rural Nova Scotia. His story, “The Visible Spectrum,” appeared in AE #4.