It wasn’t every day that you saw a nun on the hover bus to the outermost part of town. Riley was stunned when he got on, and the driver had to remind him to pay. He sat down across from her; it was just them and some old fart snoozing in the back. According to his cube, she was of Korean descent with some Hispanic traits; her oval brown face — a face that said she was in her late thirties — poked out of the black wimple. She didn’t have any luggage, only a small backpack on her lap.

So friggin’ weird. The gang would never believe it, so he took a picture with his cube. She looked at him, smiled, went back to studying her hands. He thought for sure she’d try and spread her gospel; after all, wasn’t that what religious people did? Maybe if he chatted her up … 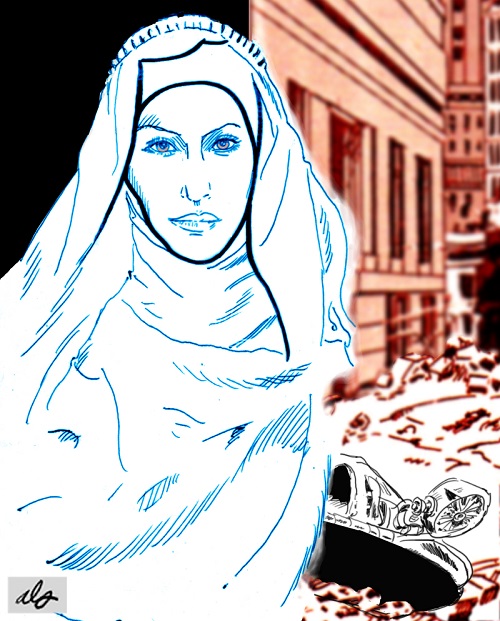 “I’m a nun.” She sat straight, clasped her hands.

“For real, huh?” He grinned. “Are you coming here to tell us what a bunch of miserable souls we are?”

“I wouldn’t know. I only just got here.”

“’Cause we’re not.” He leaned over, elbows on his knees, idly playing with the cube between his hands. “I mean it looks like shit out there, but that’s because the Orbo Brothers mess things up. They’re a bunch of evil assholes. I think if you sprayed them with that holy water, they’d go up in flames.”

She chuckled. “Holy water can’t do such things.”

“Yeah, well, I know that. I’m just saying, they’re evil. You should like banish them.”

“I don’t believe anyone is evil. We just make mistakes.”

“Well these guys made a lot of mistakes.”

The bus slowed down. The nun stood, backpack slung over one shoulder. “This is my stop.”

He jumped to his feet. “Mine too.”

It wasn’t really. His stop was another ten blocks. But he wanted to talk to her some more, because you didn’t get to talk to nuns every day. Or ever, really. He could brag to his gang: Hey, I talked to a nun today. Who did you talk to?

As he followed the nun out the door, the driver said after him, “Don’t cause any trouble, kid.”

Riley gave the driver a look that said fuck you.

He walked beside the nun on the cracked sidewalk. On either side of the street were dilapidated buildings; some in repair, some never to be repaired. The colony only makes so much revenue, the fat cats had said from their three-storey homes with air conditioning and full security.

“So where ya headed?” he asked.

“To visit a correspondent. Father Agbel. Do you know him?”

He shook his head. “Never been to church. But you can still be a good person and not go to church, right?”

“Of course. The House of God is wherever we make it. Whether it’s a physical place or in the heart.”

“What if you’re like wrong, and there is no Heaven. Doesn’t that kinda suck?”

She shrugged. “If I’m wrong, then I’m wrong. But there is no harm in believing.”

“What about …” He consulted his cube discreetly. “What about Arnaud Amalric, who told the crusaders to kill everyone.”

“Well that’s not the exact quote —”

He nudged the nun away from one of the Orbo Brothers’ known hideouts, on account of him and the gang had planted mines around the place; because fuck the Orbo Brothers, they didn’t need legs. The nun didn’t seem to mind, or maybe she had heard about his reputation and didn’t want any trouble. But it wasn’t like he went around hurting people, even though some thought it.

“Regardless,” she said. “We are human and we err.”

“So how many errors can we get away with?” he asked, twirling his cube on one finger.

“We never get away with it. But we can repent. Repent, and pray for forgiveness.”

The nun just smiled, bent down and picked up a silver wrapper from the street. She folded the wrapper, kept folding till it became a wrinkled flower, then handed it to him.

“I’m Sister Lolanda. I’ll be at the Thuta Church if you need anything.”

She nodded before stepping off the sidewalk and into a dirt alleyway between a broken down repair shop and a rusty laundromat. He held the flower up, admiring the way light glinted off it in odd angles. It made him giddy, like being a kid again, when they flew foil kites that flashed all the colours of the rainbow. Back when this colony wasn’t so much of a shit-hole. He was tempted to follow the nun, but the cube flashed a time — damn! He was going to be late.

Riley slid behind some boxes inside the warehouse, careful that the buckles on his boots didn’t chink together. He liked to observe a scene before entering it; gave him a certain advantage and kept his ass from getting shot off. Joey Boy sat on a table; a shaft of light from a hole in the roof illuminated him — or it might have been the drugs. Everyone called him Joey Boy on account of him having a face of a fifteen-year-old, even though he was twice that age. Behind Joey were two silhouettes lurking in the shadows, probably his goons — and they had a deal to not bring any buddies, either. But if Riley believed in fair deals, he wouldn’t be carrying a gun.

He entered all nonchalant, arms away from his sides. Joey flipped up his shades — his eyes were a crazy neon green — and Riley wasn’t sure if it was a side-effect or cosmetic.

Riley frowned. That had to be a joke; he was nearly ten minutes late. Joey broke the silence with a laugh that sounded like a cat coughing up a hairball.

“So, have my creds?” Joey wiped some spittle off his chin with the back of his hand.

Riley pulled a plastic bag from his jacket and tossed it. With a better throw, he could’ve smacked Joey in the head. Joey scooped the bag off the floor; a few metallic chips tumbled out.

Joey’s stare turned hard. “That’s it? I gave you a hundred kilos of Edge to sell, and this is all you bring me?”

Riley stuck his thumbs into his belt. “No one is going to buy Edge that doesn’t give them an edge. Next time, don’t give us such shit.”

Joey leapt to his feet. “You’re calling my stuff shit? Fuck you, you little runt. I want my creds.”

The two goons stepped out of the shadows, and they looked like a couple of humpty-dumpties; heads fused to their torsos, large wide bodies, waddling steps. He’d be laughing if he didn’t think these guys could split his skull with one punch.

He drew his gun, blasted the ceiling above the two goons, and made a run for it.

They wouldn’t expect him at the church. The place was so out of the way, and no one he knew went there. In fact, he didn’t think anyone went there.

The path to the church was all dirt, rocks and chunks of concrete. Spiky weeds grew large, their thick black thorns ready to stab him should he misstep. Man, he wished he hadn’t worn boots today; his feet were killing him.

The church was in view, built on a hill, looking about as dead as its surroundings. The bone white walls were tagged, the large windows black and empty. The garden was a cultivated mass of weeds. Sister Lolanda sat on a bench in front of the double doors, reading a hologram book.

“Hey-hey!” he said, out of breath. She nodded as he approached.

“You ran all this way?” She eyed him through the hologram.

“Pretty much — You reading The Bible? Maybe we could go inside and read it together?”

“Ah, cool. So shouldn’t we, uh, you be inside talking to Father Whatshisname?”

“It turns out Father Agbel left some time ago, and did not think to tell me while I was in transit,” she said, brows furrowed, annoyance digging into her sweet voice.

“Yeah, no one really sticks around this colony, if they can help it.”

She glanced around. “Yes, I can see that. I don’t suppose you have a bus schedule?”

She chuckled, her posture perfect. “I doubt that. I’m sure there are other nuns out there.”

He checked his cube for a list of nuns. The search brought up names, the word “deceased” next to many of them. He showed her the list. “See? Let’s go inside. You need to stay.”

“Sort of.” She stood and slipped her backpack onto one shoulder. “Anyway, I have to make a report that a priest has abandoned his post.”

“Ah, yeah, that’s understandable.” The church loomed in front of Riley, an inaccessible sanctuary. “Okay,” he said nervously, “I probably should get going —”

A gust, sharp and cold, cut shivers into him. Sister Lolanda’s eyes narrowed, staring past him. And he knew.

The humpty-dumpty twins were tromping up the path, and in the open daylight they looked bigger and meaner, like a pair of bulldozers with arms. They smashed weeds and rocks under their sledgehammer feet.

“You shouldn’t use your cube when trying to hide, runt,” one of them called.

He pulled out his gun.

“Yeah,” he said over his shoulder. “You should really find a bus.” He fired, and an egg-shaped glow surrounded the goons, then shimmered out of existence. Damn shields. Joey must’ve been richer than he let on to equip his goons with friggin’ shields. He didn’t have anything else on him for that. Sister Lolanda was still there, her expression cut out of stone.

What was she thinking? She needed to leave; they both needed to leave. He grabbed her wrist — something jabbed his palm; he stumbled back. A gunk enveloped him before he hit the ground. The more he moved, the more the crap constricted him.

“Joey Boy said not to kill your ass,” one of the goons said. “He says your gang will pay up.”

Shovel hands lifted him. He couldn’t even work his jaw around the scream that was building in his throat.

“Go away, lady,” the other said. “This isn’t your business.”

“Perhaps not legally, but on moral grounds —”

Everything went dead silent. He couldn’t even hear the humpty-dumpties’ heavy breathing. Another gust, and he fell. The crushing weight of a goon on top of him. Couldn’t breathe!

His lungs were burning something fierce when the weight slid off. Sister Lolanda’s hands tore away the gunk net, and he gulped down that sweet acidic air like it was the best damn thing. Sister Lolanda stood before him as she disconnected a wire from a device she wore on her wrist, underneath her sleeve. He saw that a spear had gone through both the goons’ heads; their eyes wide open, like they weren’t really dead. Just very shocked.

He had to admit, he was surprised too. He looked up at the nun.

“These two were genetically engineered,” She answered his unasked question. “Soulless abominations.”

“You’d piss off a lot of sympathetics if you said that in public.”

“I know.” She smiled and helped him to his feet. “What exactly did you do to get on their bad side?”

“It was just a stupid deal,” he said, avoiding her gaze. “Me and the gang don’t have much money, so make it where we can.”

She nodded serenely, distantly, and there was a light in her eyes he hadn’t seen before.

A bus hummed down the road towards them. Riley nodded at it.

Sister Lolanda shook her head and mounted the steps of the church.