TRANSCRIPT OF THE RADIO RELAY BETWEEN THE SOLAR GUARD PROTECTION SHIP WHITESHARK AND THE UNREGISTERED SMALL-CLASS TRANSPORT SHIP RATTLESNAKE ON THE DATE AND TIME OF 2102-02-28, 1105 UTC.

Whiteshark: You responded to the distress signal from the cruise liner. Please confirm.

Rattlesnake: Yeah, we responded all right. Ain’t no other ship within a thousand AU.

Whiteshark: Your Autonomous P-Class Drone took over the ship. It has since lost contact, and you’re not making it easy on me to presume your innocence. Why did you feel it was your place to respond to the distress signal?

Rattlesnake: Same reason they let poor fragile ladies like yourself in the S.G. We were just feelin’ mighty altruistic.

Whiteshark: I don’t believe you. Your ship isn’t registered.

Rattlesnake: Hey, fuck off. Our ship operates under a Civilian Small-Class Two-Forty-Tonne Towing License. Registration is only mandatory for over three hundred and sixty tonnes.

Whiteshark: That’s fine. I don’t care. I want you to tell me exactly what happened to the cruise ship. I want to know the exact procedure you and your crew took during recovery.

Rattlesnake: Well, we sidled up next to it, and we sent a small shuttle over —

Whiteshark: That’s not the standard procedure.

Rattlesnake: Hold on, hold on, it was a bloody month ago and I’ve forgotten the details. What’s your angle? Are you trying to nail me for ignoring the procedure? ’Cause we followed it to the letter. We consulted the big ol’ book of Solar Guard Protection Procedures, Volume Ten, Addendum Nine, published by McCain on January 3rd, 2101 in Montreal, Canada. Translated seamlessly between English, Quebecois, French, Spanish, Mandarin, Cantonese, Korean, and Japanese. Seriously, you go grab your little scout’s handbook and after every dot point I’ll be able to say, “Oh yeah, I remember, we did that, and it worked really well.” Whole thing went off without a hitch.

Whiteshark: … I’m not going to do that.

Rattlesnake: Fine, I got a copy in the glove here. Wait, no, storage deck. Gimme like two seconds …

Rattlesnake: Untwist your damn panties. I got it right here. Page … five-ninety-five. “Procedure for the Response-to-Distress and Recovery of a Large-Class Civilian Cruise Liner.” You got your own copy? You gonna follow along with me? ’Cause I’ll wait ’til you’re ready.

Whiteshark: Get it over with.

Rattlesnake: Fine, no, that’s totally all right, I’ll just start without you. Step One: Acknowledge the given distress call with the code “Five-Niner-Virgule-Eight” followed by ship registration.

Whiteshark: Your ship is unregistered.

Rattlesnake: Yeah, yeah, yeah, but there’s a code for unregistered ships. Double-X virgule five, et cetera et cetera, it’s like you didn’t even check the glossary at the back.

Rattlesnake: Step Two: Forward distress call and diagnostic information to the nearest Solar Guard Protection Ship within eight-fifty AU. Thing is, there weren’t any S.G.P. ships nearby so we had to go down to Appendix Two Virgule Six: Forward a request for review when in acceptable range of an S.G.P. ship. And that’s you, ain’t it? You got my request?

Whiteshark: Yes, we received your request. That’s why we’re here.

Rattlesnake: Seems like, if we were actually an illegal, despicable pirate, we would’ve let it go. We would not have contacted you. But we did, so I guess that means we’re legal and … spicable? And not a pirate.

Whiteshark: Get on with it.

Rattlesnake: Step Three: Evaluate the state of the ship, et cetera, et cetera, you know the whole thing ’cause you’ve got it in front of you. We took a look at the diagnostics, and out of a crew of two thousand there were three life signatures on board. Basically a ghost ship.

Rattlesnake: We thought they were human but they were actually spiders. Two huntsmen and a goliath bird-eating spider. Some dude’s pets. But even before we figured that out, we knew we oughta hit Step Four which is the real interesting part of the procedure. See, when a ship is recovered without a proper captain, it is prudent to elect a new temporary captain of the ship for as long as it takes to ferry it to the nearest settlement.

Whiteshark: You didn’t do that. You put one of your drones on the ship.

Rattlesnake: Ain’t nothing in the handbook says a drone can’t be captain.

Whiteshark: No. You listen to me. Page eight-forty-four, appendix Twenty-Three Virgule One, linked directly from the glossary as the range of acceptable requirements for a captain of a Large-Class vessel. First requirement: a license from a qualified four-year spaceflight accelerated course. Second requirement: twenty-four units of combined experience where one unit is equal to either one year of employment, which includes minimum four hundred hours of practical flight experience, or two years of flight simulation with an average P.F.D. score of eighty-five virgule zero —

Rattlesnake: There ain’t a word in there about flesh and blood. Just humour me and flip the page back. Page eight-forty-three: Procedure for the Election of a Temporary Recovery Captain for Incapacitated Large-Class Vessels. Substep One —

Whiteshark: You can’t be serious. You went through all this for a drone.

Rattlesnake: ’Course we did. We ain’t nothing but a loyal follower of the letter of the law. Substep One: Elect the replacement captain from the pool of nonessential crew via democratic voting procedure. Gotta admit, we argued for hours about this ’til the drone comes up and reminds us it’s been qualified as an autonomous pilot for Medium and Large-Class vessels since 2099 as part of the Autonomous Non-Human Skilled Worker Act.

Rattlesnake: Substep Two was harder. To swear in a new captain requires a skipper who is registered with the state. Luckily in Appendix Two Virgule Eleven we’ve got an exception: “The state will recognize the authority of a skipper to swear in a replacement captain given the circumstance that they have participated in the rite of matrimony …” which came about from Cale v. Cale way back in 2081. Real complicated case. You should read it.

Whiteshark: You can’t marry a drone —

Rattlesnake: You ain’t never studied Interplanetary Shipping Law? Escargo Shipping Pty Ltd v. Robinson gives precedent for human-drone marriages as long as we’ve got an ordained minister. Which we do. First Mate filled out the online form and everything.

Whiteshark: You married one of your crew to a mindless drone. Purely so you could swear him in as captain … on a technicality. 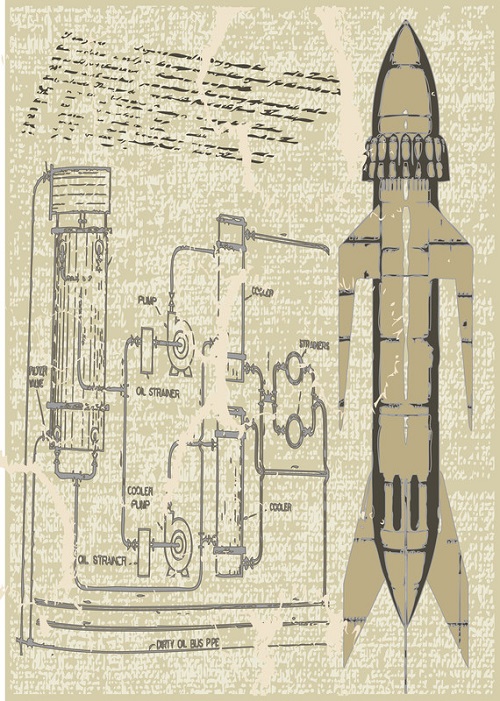 Whiteshark: You seriously went through Substep Three and Substep Four as well? You dressed up that drone in the traditional robes of a captain and you … re-christened the ship?

Rattlesnake: Ah, see, the wording of Substep Three doesn’t specify traditional robes. It specifies matching the dress of the previous captain. So we took ourselves a gander at the security footage and found that the captain was asleep and wearing a nightgown and slippers when the life support cut out.

Rattlesnake: Gotta have yourself some patience. Our decision to use the drone makes more sense now, doesn’t it? We had to use the drone because it was the only member of my crew that could’ve survived. Of course we made some convenient interpretations of the law to make that happen. You can forgive the creativity, considering we have followed every procedure to our absolute best effort.

Rattlesnake: We loaded up a half-empty bottle of gin into the cannon and blew it through the side of the cruise liner. There. Re-christened.

Whiteshark: You can’t be serious.

Rattlesnake: I am totally, one hundred percent serious. Do you have any further questions, or are we free to leave?

Whiteshark: You will need to hand over that security footage.

Whiteshark: You will comply.

Rattlesnake: No. Flip your book to page one-seventy. Right here, in Appendix Nine Virgule Nine, it clearly dictates that all security footage can only be relinquished by the captain of the ship under certain particular circumstances, including … clear and present danger … compliance with a warrant obtained from a settlement court within the previous six months … confirmation of illegal activity as part of an S.G.P. official investigation, which may I remind you, is totally different to what we’re doing now, which is much more in line with an interrogation —

Whiteshark: Fine, fine, fuck it, I’ll get a warrant.

Rattlesnake: So are we free to go?

Whiteshark: Yes. Keep in mind that we will be monitoring your activity for two months as we register to open up this case for official investigation …

Whiteshark: … What do you mean, long enough?

Rattlesnake: Long enough to get the cannons back online.