From the earliest days of the genre, science fiction has gone hand in hand with artwork that sought to stir the imagination as much as the stories they accompanied. Over the course of their shared history, the two have evolved together — not so much in tandem as entwined with each other — so that it is not always easy to say which informs the other. It is not unreasonable to suggest that some of our greatest science fiction authors may have been inspired, or least influenced, by the art that grew up alongside the literary tradition. Science fiction art has developed a visual language of its own, as rich and varied as the genre’s narrative themes.

Still, when the topic of “Science Fiction Art” comes up, most people’s minds are likely to turn to a fairly narrow range of imagery. Silver space-suits; ray guns; impossible machines of flight or space travel; monsters from either an alien place or time; perhaps a woman in distress, whose endowment was conceived in the mind of a young man. That is to say, expository imagery descended from the cover art of seminal science fiction pulps such as Amazing Stories, or drawn from the familiar vocabulary of television shows. 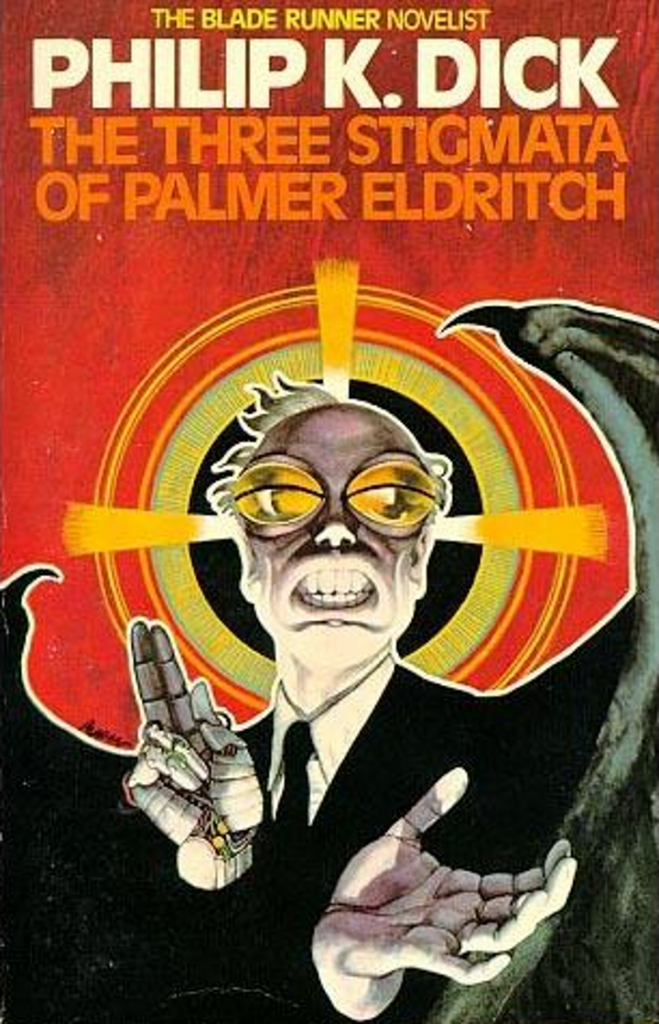 Science fiction art had its beginnings in the pulp magazines where the genre’s first stories were published. Above: Detail from Robert Pepper’s cover of Philip K Dick’s The Three Stigmata of Palmer Eldritch.

This essay is not about those more superficial specimens. Nor is it about the heavily branded look of science fiction series such as the Star Wars, Halo and Warhammer 40k franchises (or indeed certain prolific authors who have themselves become brands). Such artwork is not devoid of value in representing science fiction even today, but — just as fantasy authors and fans might prefer that their genre not be associated solely with stereotypical, Vallejo-esque imagery — I want to look beyond the usual tropes and trappings. I’d like to explore the ways art can tap into the elemental core of science fiction.

The art that has accompanied science fiction literature has been in some ways as important to me as the writing itself. For instance, inseparable from the experience of reading Frank Herbert’s Dragon in the Sea was Mel Hunter’s iconic three-colour dust jacket. When I think of George Orwell’s 1984, I will have hardly recalled Winston’s rebellion when in my mind Big Brother’s eye peers out at me once more from Germano Facetti’s illustration on the Penguin reprint I read as a teenager.

These designs not only spoke to me from an aesthetic viewpoint, but they also drew me in because they were doing more than simply hinting at what the books might contain. They expounded visually on themes at the hearts of the novels they represented. This is the kind of art that I look for now and hope to see more of in the future — art that is an extension of the writing.

When we speak of artwork representing a piece of literature there are necessarily as many means of accomplishing this as there are narrative devices, and as many ways to succeed or fail as there are stories. 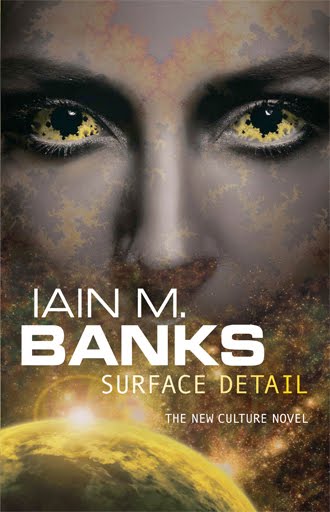 A technique that has lately enjoyed some popularity is a combination of photo-collage and digital rendering. A good and timely example of this nouveau pastiche approach is Iain M. Banks’s latest offering, Surface Detail, which combines a main photographic element with several digitally produced elements and effects to produce what is a striking, if not particularly artful, result. It certainly fits the author’s brand (both graphically and typographically), but like contemporaneous editions from Canadians William Gibson and Robert J. Sawyer that are similarly on-brand, the artwork does not necessarily convey any further meaning to the reader’s eye. That is not to say that it is bad … merely lacking.

For a exercise in contrast between different illustrative approaches, consider the divergent covers for different editions of Ender’s Game:

It may be unfair to single out the cover on the left as it is fairly typical of book art directed at young adults (there’s an edition of Neal Stephenson’s Snow Crash with a similar design). But this reliance on a certain generic subset of imagery, as widespread as it is, does not tend to do justice to the material it is meant to represent.

Upon first glance, it evokes low-budget special effects of the kind used in children’s television shows such as Animorphs (which itself has a lot to answer for when it comes to the covers of its franchise novels). Beyond this initial impression, there isn’t much there. I don’t mean that it is minimalist, but rather that it is comprised mostly of ambiguous visual effects which are meant to evoke the interaction between the boy and his game. As with the pulp magazine covers, it’s merely an attempt to display content from the novel in the abstract, right down to the (near-spoiler) text “For Ender Wiggin, it’s not a game anymore …” Yet Ender himself is left faceless and anonymous.

This is emphatically not the case in the cover conceived and painted by the very talented Sam Weber for Tor’s eBook release. Immediately it is apparent that there is a level of craft that isn’t present in many covers of this type. It is an actual, honest-to-god, analog painting — no composited portraiture or distracting digital effect here. And the painting of Ender, alone, is a strong and appealing image. Ender’s face and eyes powerfully portray the troubled yet brilliant youth. This is more than a portrait — here we have Ender in flight, beyond his home world, in both the real and conceptual space he inhabits in the book. Couple this with unimposing and appropriate typography, and you have a compelling cover that also communicates something. Where the young-adult cover shows us only a nightmarish CGI snapshot of the novel’s setting, the latter shows us something inside Ender, expanding our understanding of the character.

Another effective technique is to incorporate strong typographic elements as part of a graphic or photographic composition. The processes of printmaking, photography, vector graphics and typography are each distinct disciplines within the field of image making, but they often make winning bedfellows. However, some such works tend to be overly stylized and can end up looking dated in retrospect. And sometimes this approach serves to create a striking effect or establish a brand without telling the reader very much about the particular work in question. Such covers, especially minimalist typographic ones, carry an implicit expectation that the reader will choose the book based on factors such as word of mouth, or the reputation of the author or publisher.

For an example of a misstep with a typographic design we can look to the Vintage editions of Kurt Vonnegut’s books published in the 1990s. They were almost purely typographic, with each title in the series distinguished only by its colour and small illustrative icon. The artwork is not simple enough to be ignored, too simple to be meaningful and overwhelmed by the large “V” in a geometric typeface. As a series design, it falls flat in my opinion. It is self-serious in a patently 1990, nouveau art-deco way, and seems entirely wrong for Vonnegut’s brand of humour and the sense of irony that he injected into his work. Thankfully the series was later redone in a more suitable if not more informative style.

I want to close with an ideal example of the coupling of photography and typography in science fiction art. Icarus at the Edge of Time, by physicist Brian Greene, is a retelling of the Icarus myth in outer space with the reckless youth journeying toward a black hole rather than the sun. Though I have not read it, it strikes me as a book that perfectly embodies the value that art can bring to the science fiction table.

The book was designed by one of my favourite designers, Chip Kidd, who also happens to be an author. Kidd is an amazing mind when it comes to design, although I had singled out this cover before learning that it was his design. And it truly is his design: Kidd designed not only the covers, but each of the full-colour pages as well. The Hubble photography that he chose to illustrate the narrative places the reader in the vastness of space with all its beauty and danger. The black circle in the centre of the cover is carried throughout the book, representing the omnipresent black hole. It is an example of art and literature coming together to form a unified whole that is greater than the sum of its parts.

If the covers of books were left bare, the contents no doubt could speak for themselves. But a good cover with the right art can elevate a book. The best art can not only influence our purchasing decision but also enhance our experience of the writing.