Allison was standing in the kitchen looking at a spot on the linoleum. She’d tried some things to get it out and there were some other things still she could try. David’s voice swam into her head like a dream.

Coming, she said. She cocked her head to get a look at the spot from a different angle.

Allison shook her head and drifted free of the stain.

David was in the living room in his black skin, his power skin, the Africanized skin he wore every day to work now. In his hands with the thick brown fingers he held a package. He frequently came home with packages. The contents were never for him.

Look at this, said David, holding the package out.

Allison took it and looked at the image on the wrapping. It was a picture of a skin, and beneath the image, through the transparent packaging, she could see the skin lying wrapped there pink and flaccid. Yes, that was just the sort of skin David liked.

Well? What are you waiting for? Try it on!

She went into the bathroom and pulled the skin out of its plastic embellishment, soft pink mass between her hands. Underneath that, wires in diamond pattern, crosses meeting in sensors. They were scratchy and inflexible but over time the natural skin abraded to accommodate the mechanism.

Allison sighed, took off her clothes, and pressed her thumb to the controller at the base of her spine. Her current skin slipped into a yielding pile at her feet from which she stepped and pulled on the new one, securing it with the push of another button. She didn’t take the time to look at her real skin in the mirror; she and David hadn’t shared real skins since the wedding, twelve years earlier.

Her new skin on, Allison went into the bedroom. David was lying on the bed wearing a different skin, his flamboyant skin, white as baby’s breath and thinly toned. The lips were very red. Besides the black skin, this was pretty much the only skin he wore. Allison, conversely, had closets full of skins, in white and black brown yellow green and red. (David’s tastes sometimes ran to the kinky.)

Come here, David said. He was working at hardening himself, working his hand up and down his length. There was a disconnect between the skin and the man himself sometimes, and the member didn’t want to raise its staff, to believe. Allison crossed to the bed, climbed in, and straddled him. Her warmth was too deep buried beneath the skin to be the cause of his erection, so it must have been the image of her, the image of the new skin she was wearing, that made him stiffen.

Closing her eyes, she let him enter her: first her skin, and then, somewhere deeper, herself. 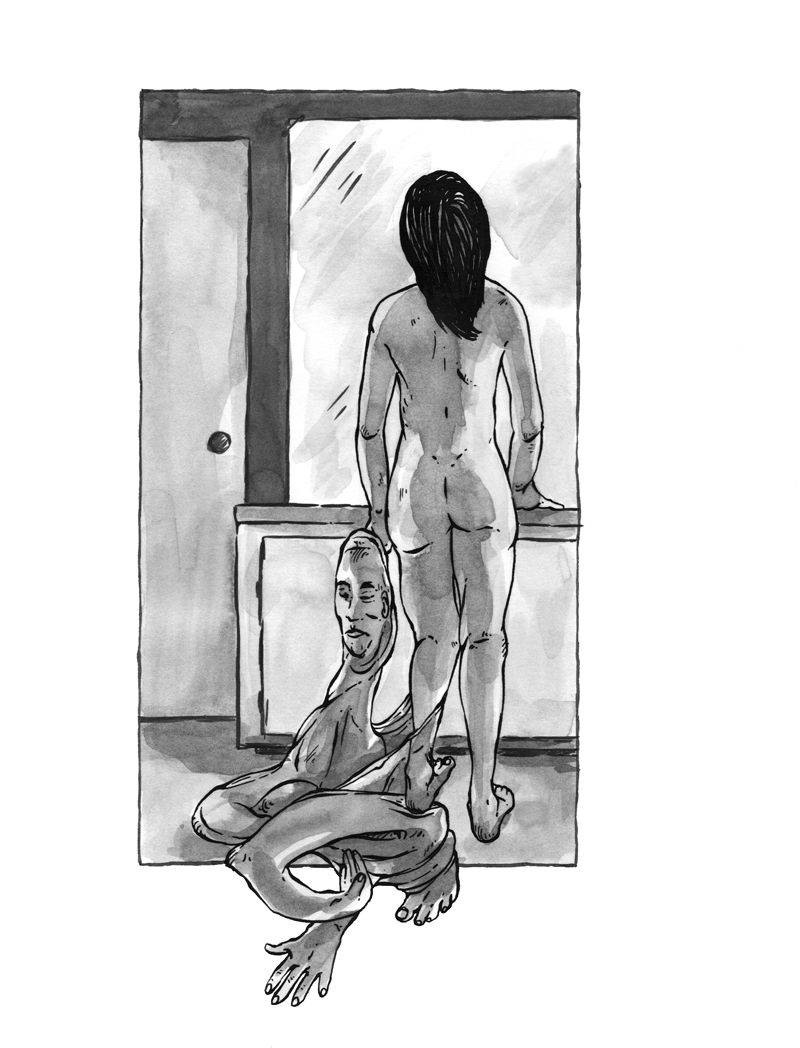 Allison woke the next day after David had left for work. She washed but stayed in the same skin as last night. She looked out the window at the backyard, half overgrown, while she sipped coffee. Who would cut it? The grass. Then she went out.

The skin market was alive with moving bodies, watching bodies they were not and other bodies they might become. Allison leaned into racks and felt the flesh she might pass off as her own. She could make herself a lizard or a rabbit; David would like these skins. Or she could be a Mongolian steppe mistress, a boxeress. These were the bodies she dreamed of, strong and hard, but David made her something soft and gentle.

She settled on an alternate model of the skin David bought her the day before, Gorgeous Georgeanne. This version was called Gorgeous Georgeanne’s Guns, and featured high definition abdominals, tight biceps, and curved thighs. When she got home and skinned up, it tightened around her, pulling in her rib cage, inflating her muscles with glorying pain.

She walked around the house flexing and looking at herself in the mirror. She scrubbed the spot on the floor with a product branded to be infallible but failed again to remove it.

What, you don’t like the one I got you? David asked when he got home that night.

It’s not that, said Allison.

Honey, said David, I don’t want you to have to feel like you have to be strong. You’re my wife. You’re my princess.

This isn’t you. The Allison I know is gentle.

When he was inside the skin, too, it didn’t make her feel strong at all. It made her feel like a patina, scraping herself onto a mannequin thing.

The next day Allison sipped her coffee while staring at her husband’s rack of skins. He had collected a dozen, though she couldn’t remember the last time he had worn most of them. He may never have worn the Thai one.

Allison had at least a hundred, and David was always asking her to switch one out for another. She wondered what he would think if he saw her in one of his skins. The thought made her laugh.

She sipped coffee and pursed her lips against stained teeth. Who would get those out. The stains. She wondered how she would feel inside a man’s skin.

She pushed the button at the base of her spine and felt Gorgeous Georgeanne slip away from her. Her skin was cold without a skin to be in. She grabbed the nearest skin from David’s rack, an old Italian thing he hadn’t looked at in years, wrapped it around herself and felt the skin morph to her frame.

Her breasts were compacted to nothing, mass squeezed out into her shoulders and back. Her face hardened. Yet even for the exertion, she felt stronger, like she could breathe better. She looked in the mirror and liked what she saw: the trim physique, the small moustache.

After a while she decided to go outside with it.

She went to a café on a quiet corner in the financial district. There, she ordered a lemonade and an espresso. She was surprised and delighted at the sound of the skin’s voice, deep but mellifluous, not gruff. She drank the lemonade and espresso and watched patrons enter and leave the café. A woman in a white skin and grey suit smiled at her and Allison returned the smile.

By the time David got home she was wearing another skin, one of her own. Something, anything.

She went to the café all that week, dressed in men’s skins. She felt good there. She felt high. She tried to try all the drinks on the menu just as she sampled the skins in David’s closet. On Thursday she was drinking her second americano, dressed in the same Italian skin she’d first worn, when she saw David enter the café and go to the bar.

Her throat stuck and her fingers shook against the handle of the china cup. David was looking at the menu, not at anyone else. He had his briefcase with him; he was off somewhere, in a rush. In his strong African skin. Finally Allison stood up and went and stood next to him.

Sorry? said David, looking at her out of the corner of his eye.

He didn’t recognize her. He didn’t, you might say, recognize himself. Anyone could be wearing this skin.

David turned to her and squinted his eyes. Excuse me?

David continued to stare at her with squinted eyes. A long slow comprehension dawned in his eyes and they widened like twin dawns.

Excuse me, said David, I have to get out of here.

He pushed past Allison, his coffee abandoned on the counter.

Is this yours, sir? asked the barista.

I’m not sure, said Allison.

When she got home David was pacing in the living room.

What the fuck is this? he said. Allison?

Allison was silent. David ran a hand across his scalp and sighed heavily. Then he went into the bedroom.

Allison went to the window and looked out. The world grew outside. A wind painted the glass filled with her translucent reflection: a thinly built man in a brown suit.

She heard David talking to someone on the phone in the other room and then he came back into the room. He had changed into his pink skin, sexy skin to him, not power skin: vulnerable skin, fucking skin. He was buttoning cufflinks to his jacket sleeves.

I’m going out, he said, and when I get back, I want you gone. I can’t live this way anymore.

He slammed the door on his way out.

She went into the bedroom and looked into the closet, at all the different skins hanging there. She turned around and saw David’s black skin laid out on the bed, as though forgotten. She cocked her head to look at it from a different angle. Then she pushed the button at the base of her spine and stepped out of the Italian skin and into the black. It surrounded her with mass and strength. She understood why David liked it. She’d always understood but now she really understood. Looking out, she felt above.

She put all the men’s skins in a suitcase and put on one of David’s suits. She checked the log on the phone and queried the address of the number David had dialed. Then she went out and the house was empty but for the skins of a hundred and some women of different colours and kinds, all of them as gentle as butter.

When she arrived at the lawyer’s office, he was sorting some papers. He looked up at Allison in surprise.

David, said the lawyer, I didn’t think you would be here so soon.

The bitch is stealing from me, said Allison. She had thought her voice would quake but it was as real and stable as the skin that surrounded her.

She’s wearing one of my skins right now. I want a divorce.

I need you to transfer everything you can into a new account. One the courts won’t find. I’m not giving that whore a penny I don’t have to.

I can see you mean business.

Allison cocked her head. From another angle, she could see the many ways this could all collapse around her. Destroy her. But the skin made her strong. She felt high.

Don’t let the skin fool you, said Allison. It’s very difficult for me, underneath.