They named him Hermes and kept him in the basement, where he scuttled about on copper claws among the clumps of stale cotton candy.

They named him Hermes and kept him in the basement, where he scuttled about on copper claws among the clumps of stale cotton candy. Bea didn’t feel guilty about this. Harrison, on the other hand, periodically suffered bursts of shame. On these occasions he’d weep, punch a wall, groan, and run towards the basement door screaming “I’ll save you, Hermes! I’ll save you! What have we done?” Bea, lighter and faster and generally more controlled, would beat him to the door and bar it from him. Harrison would beg for the key. He would get on his knees, clasp his hands, kiss her boots, and whisper “What have we done, Beatrice? What have we done to him?” A soft scratching could then be heard from the other side of the door. They both ran from this.

Bea spent most of her time upstairs in her room, drawing in sketchbooks. Harrison prowled the woods behind the house shooting things. These were the activities they enjoyed the most, and so this was how they spent most hours of most days. Bea never showed Harrison what she drew. Harrison never told Bea what he shot. Both had stopped asking.

Tuesdays were different. Tuesdays were for fortune gathering. Harrison would wake at dawn, shower, brush his teeth, and get dressed. His chain mail suit clicked and clacked; his steel boots hammered as he descended the stairs. Bea would meet him at the basement door with a cup of coffee and encouraging words. He’d listen, sip from the mug, smile with effort, and lower the plexiglass visor of his helmet.

“Flick it,” he’d sigh. And Bea would oblige. With the snap of a lever the basement filled with cotton candy, seeping from vents and tubes. Bea unlocked the door with the key around her neck, patted Harrison on the back and shoved him in. She locked the door after him and sat in the kitchen staring at a wall, waiting. Across the table, the rest of Harrison’s coffee began to cool. 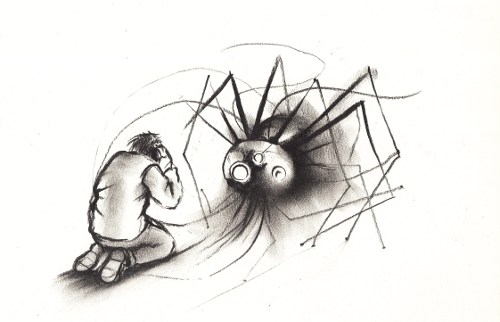 Harrison thrashed about wildly in the great mass of pink, yelping between mouthfuls of sugar, shoving his way through the thicket of candy cloud. Using his flamethrower he cleared a path along the wall. The radar detector on his wrist began to beep rapidly. Molten candy dripped over his visor.

He was close. This was the most dangerous part of the mission, the most life threatening event of his week, his absolute least favourite part of Tuesday fortune gathering. Harrison got down and crawled.

On his hands and knees, Harrison reached out, trying to feel for anything metallic, any movement. All he could see was one bright, terrible shade of pink. Reaching, grasping, shuffling forward. He was so close. It should be right here. Right in front of him. Something hard and cold brushed against his chain-mailed leg. He turned and tackled it down.

Hermes was struggling in the cotton candy, his various appendages and wire tentacles and crab legs twitching and groaning in the immobilizing sticky pink. Hermes did not have a sound box with which to vocalize his thoughts or emotions, but these groans from his joints sounded like suffering to Harrison. He always tried to get this part of the job over with as quickly as possible. Pinning the copper thorax to the floor, Harrison reached his fingers about its body, searching for the latch. He found it and wiped it clean of cotton candy. Hermes began to struggle with new vigour, rocking back and forth, groaning louder. “Hush now, Hermes. It’ll be over soon.”

Harrison slid the latch to the side, causing the flap to spring up. Puffs of green smoke trickled out and choral music began to play. With the care and precision of a surgeon, he reached inside the thorax and slowly pulled out a length of ticker paper. He rolled this into a tight tube and placed it in his pocket. One more necessary step and he could hightail it, forget about all of this, and go back to shooting things in the woods, which he loved more than anything or anyone.

Finding the slot, he inserted a quarter. It bounced in two or three directions and finally landed somewhere inside of Hermes with a plaintive ching. Hermes stopped struggling. The smoke dissipated and the music ended. His appendages went limp and sprawled out. Harrison closed the lid flap, snapped the latch in place, and picked up the flamethrower. He cleared a tunnel straight back to the basement door.

Bea made her patient way to the basement door and unlocked it. Harrison stumbled out, fell to his knees, and threw his flamethrower across the kitchen floor. She quickly, expertly, swung the door behind him and locked it.

“I figured as much.”

“He was in the usual spot, the far left corner. I wonder if he’s built a nest there or something.”

“But he doesn’t need a nest. He can’t feel anything. Nests are for warmth and comfort. I’m sure he just goes to that corner because it’s the last place to fill up with cotton candy.”

“Maybe you’re right. I need to get this suit off. Take a shower. Eat something.”

“Of course, of course. Here now.” And so Bea removed Harrison’s plexiglass visor, his chain mail neck protector, his chain mail leggings and chest armour, his beeping radar detector and his steel boots, which fell to the floor with a dense dead sound. Harrison handed Bea the rolled tube of ticker paper and went upstairs to shower. Bea began cooking breakfast. She rinsed the mug of cold coffee.

Together again, at the kitchen table, behind their steaming plates of egg, sausage, tomato and potato, Harrison and Bea said nothing. They ate, they drank coffee, and eyed the ticker paper on the counter. Finally the food ran out and the silence broke.

“I wonder what it says.”

“Not until noon, Harry.”

“But these are the rules. We have to follow them.”

“Because they’re the rules.”

“If we broke the noon rule, why not just break every rule? Why not live without any rules at all? Why not just live meaningless, directionless, pointless lives without boundaries or understanding?”

“Is that what you want, Harry? Meaninglessness?”

For two hours, Harrison sat motionless at the kitchen table, staring at his empty plate. Bea came downstairs at noon.

“It’s time,” she said. Harrison snapped out of his daze and smiled.

“Just a second Harry. Oh, now where did I put it? Could have sworn it was in a pocket somewhere.”

“All right, all right. Here.” She unwound the scroll slowly. “‘Every existing thing is born without reason, prolongs itself out of weakness, and dies by chance.’”

“By chance? Dies by chance?”

“That’s what it says, Harry. Dies by chance.”

Harrison and Bea pondered this. The ticker paper was always obscure. Hermes’s declarations tended to be general, impenetrable, sombre. It made sense, to Harrison. Hermes spent his existence crawling through clumps of old cotton candy in the dark. The only variation in his little life was being tackled on Tuesdays. How could his ticker paper thoughts not be sombre, not be general? It was inevitable. Harrison cried. Bea left.

The week carried on without any surprises or notable events. Harrison shot 26 things. Bea drew 59 drawings. For seven days, dies by chance repeated over and over in each of their heads, a mantra, a motto, a background thought to their work. They counted the days until Tuesday, hoping secretly for a new lesson to inspire their lives, desperately needing further advice.

This Tuesday, he woke at dawn. He dressed, he sipped the coffee, he listened to Bea’s encouragement, she flicked the cotton candy switch, he flame-threw his way through, tackled the pink and copper spider, removed the ticker paper and inserted the quarter. At noon, Bea read out loud.

“Freedom is what you do with what’s been done to you.”

Harrison thought about freedom. Bea thought about what’s been done. She turned the paper over in her hands, her body shaking slightly and rocking back and forth. Harrison was still. Neither said a word. Six minutes later, Harrison stood and punched Bea in the jaw, sending her backwards in her chair and into the sink, where her neck snapped back and she crumpled.

Harrison tore the key from her limp neck and ran to the basement door. When he unlocked it and swung the door open, Hermes was waiting on the top step. The copper claws and legs groaned, propelling him forward and out. LED eyes swivelled on stalks, the pink-stained thorax bounced up and down with each step. Harrison, in tears, bent down to his knees. He began to beg forgiveness.

Blessed are the hearts that can bend; they shall never be broken.

In the depth of winter I finally learned that there was in me an invincible summer.

Character is determined more by the lack of certain experiences than by those one has had.

And on they went, the meaningless messages, the ideas and fragments of thoughts. Harrison could not understand a single one, but he kept grasping, kept gathering them as they fluttered about him in a thick snow of paper. He was blinded by the white flapping things. He had lost sight of Hermes entirely. He was lost.

When the papers stopped snowing and tiled the floor completely, Harrison realized the front door was open. Hermes was gone.

Harrison looked over at the kitchen table. He eyed his chain mail gear, flamethrower and radar detector. He considered a hunt.

J.H. Ramsay is a 4th year student of English and Philosophy at the University of St Andrews, in Scotland. He grew up in Bridgewater, New Jersey and has a strong affinity for Portuguese Water Dogs and ice hockey.