I pulled over onto the shoulder of Highway 16 and opened my door for the hitchhiker. The sweat from the summer heat ran down his face as he pulled the door closed. His grubby jeans were shoved carelessly into rubber boots that reeked of manure. Just the sort of person I wanted.

“I just need to get to Township Road 255. Got my combine in the field. Hoping to get in a full day’s harvest,” he said after thanking me and settling into the ripped passenger seat. I put the old Impala in gear and pulled back onto the highway.

“Well, happy to give you a ride. You’re probably the only verbal interaction I’m going to get today,” I said, aiming for simultaneously off-the-cuff and nerdy. The stranger took off his Viterra Feed cap and scratched his forehead where the farmer’s tan ended. “Name’s Rick, pleased to meet you.” 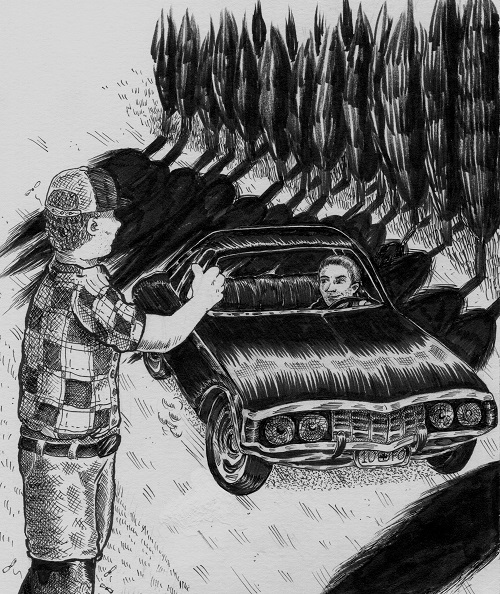 He was in his thirties, crinkles beginning to form around his eyes, his wind-reddened skin contrasting with his short blonde hair and day’s stubble. The perfect stereotype of a Saskatchewan farmer. I kept my doubts to myself.

I saw him take in my ponytail, beard stubble, jeans, and Nietzsche tattoo. I may have somewhat overshot “typical grad student.”

I told him I was a South American exchange student doing my sociology thesis on Ukrainian descendents in Canada, on my way to Regina to see a friend. Some of it was even true.

He didn’t seem bothered by my casual questions about religion, diet, farming equipment tech level, and relationships. He gave very typical answers. Even when we discussed wheat strains, he showed just the right amount of knowledge.

He spelled out his surname and I scribbled it as I drove, making sure to get the correct number of Y’s.

We shared a chuckle over his major source of income. Government crop subsidies are good for a laugh in farming communities everywhere, I think.

We turned in unison as a red-tailed hawk did a dive-and-cover into the wind-scoured grass beside the highway.

“Poor mouse,” I said, testing him.

“Well aimed,” he replied, as suited a farmer who dealt daily with minor deaths. He may have shuddered though. My attention was diverted as a truck passed us, the first vehicle in over an hour.

Township 255 was a narrow gravel road lined with Lombardy poplars. Our dust plume hung behind us like a contrail. “Just a klick down the road,” he said. “Hope you don’t mind.”

“Thanks so much,” Rick said, closing the car door with just the right effort and use of musculature. I did a three-point turn as Rick walked over to the huge green John Deere combine, each wheel the height of a man. The uncut hay gleamed in the field behind him. He climbed up the ladder into the driver’s seat, gave me a ‘see ya later’ kind of wave and began some kind of maintenance routine.

I parked the car behind the next slight rise. The poplars, tall and dense with a summer’s growth, made good camouflage. I unfolded my nine-foot frame from its human-sized compression and flexed my secondary ears. Man, that felt good.

I loped behind the poplars, silent and swift. Rick had gotten down from the combine and was fiddling with the wheel hub. As the hub opened into an airlock, I pumped my arm in triumph, just like a human. Damn, could I spot them or what! Fourth one today!

Rick entered and continued on through the inner lock. I got a glimpse of a Class Five spaceship dashboard before he closed it behind him. A Gliesian from out Andromeda way, without a doubt. His only mistake had been hitching a ride without a farmhouse in sight.

The Impala’s seat had grown warm in the sun. I recompressed myself and adjusted my internal thermostat.

As I put the car into first and headed back for another tour of the highways, I gave a sigh of satisfaction. Just a few more hitchhikers and I would have enough data for my thesis.

The University of Galactic Sociology (Vega campus) had already approved my topic: “Niche Influx of Aliens: A Study of the Acculturation Patterns and Coping Skills of Non-Terran Crop Researchers in Rural Canada, Terra.”

Holly Schofield writes from the extreme western edge of Canada. In fact, any farther west and she might fall off. This is her second story in AE: “Tough Crowd” appeared in Issue #9.