Connie watches the tour guide seal the chambre du voyage. The other tourists titter in their seats. Several hold hands. Silently Connie holds her own.

The guide presses a button. A loud click, a rising hum, and the room shimmers. Connie feels a squeeze that makes her want to pee, and despite her protective goggles she closes her eyes. A flash envelopes the room, and after it fades the room’s features remain the same, but the ambiance has changed. The light from the windows is dimmer, the air is heavier, but it smells much sweeter because in this Paris it’s raining.

The guide, Madeleine, says, “Voici. Remain seated for un moment to settle, then we will leave together.”

She might as well have told her kids to admire the Christmas tree before tearing open their presents. With growing smiles, the other tourists yank off their goggles and crowd the eastern windows to see a Notre Dame that survived the last war.

Connie doesn’t. If you’ve seen one Notre Dame, you’ve seen them all. She trades her goggles for oversized sunglasses, puts on her cartwheel hat and approaches Madeleine.

“I could use some air,” Connie says. “May I wait outside?”

Connie slips fifty universelles into her palm, and Madeleine unseals the door.

The welcome center is lined with wallscreens and divided by a rope line. Were anyone waiting to enter the chambre, the screens to the left would entertain them with a history of Eiffel travel, starting with Dr. Rowndell’s famous mistake. While testing a modified demi-hunter, a pocket teleporter, she travelled not to the adjacent lab, but to an adjacent lab in an alternate École polytechnique. Another screen depicts her desperate attempts to return to her own university and the two handsome men who helped her. The rest describe in chirpy terms the science behind alternate worlds, the explorations of other Parises, and the treaties established to minimize world creep in order to avoid the type of damage teleportation had caused.

The screens to Connie’s right describe laws to be wary of and curious native customs. Connie marches past them without a glance. The differences between the Parises are breaking down because world creep doesn’t sign treaties. Starbucks really is everywhere now. There’s no reason she shouldn’t be too.

Soon all worlds will be as constant as the Eiffel Tower in every Paris, the gift shop in every welcome center, and the replica demi-hunters sold in every gift shop. Connie has collected thirteen now, one for each Paris she’s visited and Bob she’s collected. As she weaves through the shop, she notes the one she’ll buy when she returns.

Bob’s a constant too. If the same person exists in two Parises, they’re usually as different as the alternates who helped Dr. Rowndell. People don’t suffer the averaging effect that makes the Parises so much alike. One throw of the historical dice turns the generations to follow into fundamentally different people, however much they resemble their alternates today.

The Bobs, though, have the same job in every Paris she’s visited as her Bob has in their world. The same routines and flat. The same proclivities. As a result, she’ll stick to the same plan. Connie checks her watch. Bob will arrive home from work in thirty minutes. That will give them more than enough private time together. His wife won’t be home for hours.

They’re no less constant, the Bobs’ wives. They were all made for each other that way.

At the gift shop’s exit, Connie makes sure the clerks aren’t looking, then she slides off the green armband marking her as a tourist, stuffs it in her coat pocket and steps outside.

A cold drizzle wafts over the top deck of the tower. She does up her coat, chocolate like her scarf and flats. Her knee-length cream dress is cut to match the local fashion. She’s wearing only small gold hoops, which are never out of style in any world. She might as well be invisible to the few others on the deck, but a Bob can’t resist a cream dress or a well-used scarf.

Connie tugs on her cartwheel hat and calls for the lift. While waiting, she looks northeast of Notre Dame to the 3rd arrondissement, where Bob lives. She can smell his whores on the sofa from here. 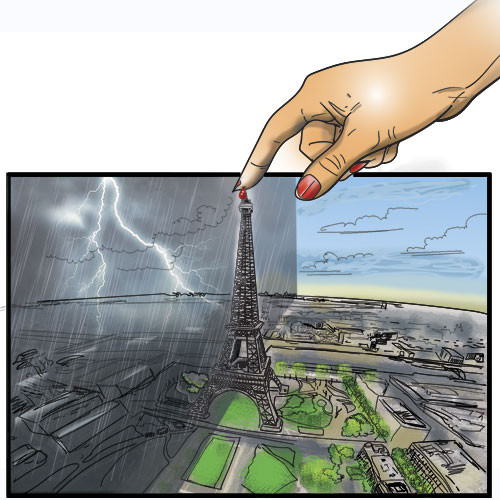 A zipcab leaves her at the corner near Bob’s flat. The windows are dark and the blinds up; he’s not home. Perfect. She tries her key. It doesn’t work, but she couldn’t resist. No matter. Connie removes two thin steel tools from a pocket in her sleeve and picks the lock. She bolts the door behind her, takes up the mail and goes into the living room.

It reeks of whore, and the décor tells her that this wife can’t smell it yet either. The pictures of her and Bob on the mantle, the fresh flowers in a vase, the other vases unbroken, the sofa unslashed: The whole room disgusts her as much as the wife’s stupidity. She can bear it, however, for a little while. She’s had practice. Connie puts the mail in its usual place on the coffee table, leaves her coat and hat on the back of the sofa and goes to the bedroom.

The story’s the same. One bed. One large closet. Their dirty clothes jumbled together on the chair. She hasn’t moved into the study yet. Connie plucks a bottle of perfume from the wife’s vanity and applies it like camouflage.

She returns to the living room, sits on the couch as if in the laps of a dozen other women and waits. She breathes deeply three times like her yogist taught her, and Connie lets her mind shut down.

The lock snaps. Connie snaps to and checks the wall clock. He’s late. Two hours left. She stands as Bob enters the living room, carrying a bag of groceries. Startled to see her, he checks the clock himself.

“Not for long,” Connie says. She slowly undoes her scarf. She used to be clumsy doing this and worried about the slackness in her neck. Now she enjoys how Bob tries not to quiver as he sets down the bag.

Connie closes on him, throws the scarf behind his back and pulls it taut. He gasps, but after a second against her he relaxes. Bob sniffs her neck. He puts his hands on her hips. She shrugs them off. “No,” she says, “you don’t get to touch me.”

She slides behind him, glad for once that she’s much taller, and slides the scarf up to his throat. Connie saws the scarf across it.

Bob says, “You—” then she loops the scarf around his neck. He breaks, and Connie steers him like a horse to the couch. She bears him down, puts a knee in his lower back for leverage, then she rubs his face over the cushions.

“Do you smell them?” Connie says. “Smell them.”

Bob claws at the scarf, but it’s biting too deeply into his skin. She checks the clock again. It takes four minutes to strangle someone. Bob might pass out in a minute or two, but she has to be sure. It’s almost boring, those last couple minutes.

He tries to roll off the couch, but her other leg blocks his hip. Bob bucks, and her knee slips off, which lets him rear and get his own knees under him. Connie loses her balance, but not her grip on the scarf, so when she falls she twists him backwards and smashes his head against the coffee table. She drags him over it until she’s on her back and he’s on top of her, facing up. Bob kicks and flips the table over, which gives her enough room to wrap her legs around him and squeeze. He weakens. His hands wave over his shoulders, then flag. She smells his piss.

Connie checks the clock. Seconds until he’s out. She hopes his piss won’t stain her dress. That would be hard to explain to Madeleine.

A shadow falls over Connie. She looks up into her own face. It has more chin than she’d have thought, and that lipstick doesn’t suit it at all.

Bob’s wife heaves up a large, heavy ceramic planter with a small tree in it and holds it over Connie’s head.

“I’m doing this for you,” Connie says.

“That’s what the last one said. I don’t need your help.”

Connie tries to roll away, but Bob rocks in the opposite direction, holding Connie in place. His wife drops the planter.

Around its rushing bottom, the room, the clock, the wife and Bob shimmer. Connie feels a terrible squeeze. She pees. There is no flash.

Bob rolls off Connie and tears away the scarf. He hacks and spits, remembering how to breathe. His eyes get small again.

His wife sits on the edge of the couch and tries on Connie’s hat. She likes it. Then she pats her lap.

Bob crawls to her and lays his head in the hammock of cream-colored skirt between her thighs. “Constance,” he says, “we really should move.”

“No,” she says. “This is my home.” Constance strokes his hair so hard it squeaks. “Mine is mine.”