My bicycle was stolen on a Friday. Three days later a man with a face of blue tattoos appeared in my office.

My bicycle was stolen on a Friday. Three days later a man with a face of blue tattoos appeared in my office. He held up a piece of torn note paper.

I did. Then he was gone.

I looked down at my notepad where I had just moments ago jotted down the details of a lunch date. I started shaking and still hadn’t stopped, fifteen minutes later, when he walked back through the door.

“Who the hell are you? What is this about?”

“Time-pilot Shere Manjala.” He held a hand out across my desk. I took it slowly. Each finger had a ring, and some had two. “We needed your bicycle.”

The tattoos on his face looked like coiling dragons, but I couldn’t be sure. They kept shifting as he spoke. 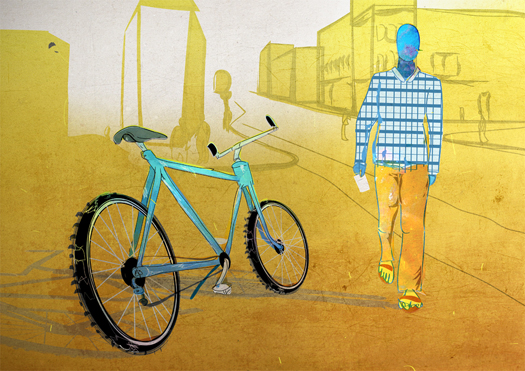 He sat in the old planetarium bench I used for a couch. “Twenty-five hundred years in the future, technology and magic are indistinguishable.”

He nodded. “But not just to you. To us too. There’s a war. And we need weapons. The spells the dark mages broadcast don’t work well on things from this long ago. Different quantum resonances.”

His clothing seemed normal: a flannel shirt, khakis, worn leather sandals. The tattoos were not. They stretched from his chin to his bald scalp and writhed when he grimaced.

He did that now and leaned forward. “The Lords of Decay brought in the undead.”

“You have films about them during this period, right?” He looked relieved I had used the word first.

“Not the same thing, our undead, but close enough. Not human dead.”

I waited for him to say something else, but he just rocked backward slightly on the bench.

“So you fight zombies,” I finally asked, “from the future?”

His laugh was sharp and bright. “Oh no.” He grinned. The dragons danced. “Not me. I just collect the tools. Yours was a blue Schwinn eighteen-speed mountain bike, yes?”

I had owned that bike for almost sixteen years.

“Our own weapons turn to dust at the edge of the Steeped Plains. Can’t get close enough to do any good. But things from this period can.”

He heard my tone and held up a hand. “You want proof.” Reaching forward he tore the top sheet from my notepad. “Sign your name on this.”

I stared at the sheet. “What if I don’t write anything?”

“Then you’ll create a paradox. Here.” He pulled a pen from somewhere and scrawled on the page. Then he twisted a ring on one of his fingers and vanished. I waited three breaths, and he was back.

“Sure. You just went back to twenty minutes ago and showed up with that paper in my office. I remember. But what about my bike? Can you make it reappear?”

“Right.” The dragons on his face twisted again. “How do you stop an army of zombies marching toward the Pearl Cities across the Steeped Plains? We’ve got fire, and a few re-engineered wyrvn, but nothing from our own time works anywhere near them. We had a whole fleet of zeppelin raining bombs like they were feeding fish, and by the time they had fallen thirty meters they were just blowing dust.”

“You already said that.” I pulled my lip. “You snag stuff from the past, I guess. You took my bicycle. I would have thought you’d want jets or tanks or something.”

His teeth flashed as he shook his head. “Too heavy to carry back up the timeslope, and not enough fuel for them anyway.”

“You’d have to lug back a lot of ammunition.”

“Then swords I guess.” I spread my hands. “Broadswords and bicycles. Maybe baseball bats.”

“Right. You don’t need to reload a sword. And the Plains are baked smooth as glass. So we’ve been scouring the past for bikes to pull into the future. Simple to use, lightweight, effective.”

I was silent for a moment. It had been a good bicycle. A few winters ago I had replaced the plastic pedals with metal ones after the originals had snapped off while riding it across an iced-over parking lot. It had found its way home the single time it was stolen in college. It never threw its chain, even when I shifted going down hills.

“Well.” I found my throat surprisingly tight. “I’m glad it could be of service. But if you can carry it one way, can’t you bring it back?”

“We will.” He nodded vigorously. “She’s always riding somewhere on the back of time now. No problem there. We’ll go back a few weeks before I took her and pull her out again.”

“It was a glorious battle. Littered the plains with their corpses.” He paused. “But not quite enough. They generated new spells. Rough on our men. Threw off their balance. Wobbly inner ears. None of the sureness that comes from learning to ride as a child.” Again the grimace. “It was a shame to see the Pearl Cities burn.”

Suddenly his hand was around my wrist.

“We’ll retreat a bit down the timeslope and try again. Get more bikes. More swords too.”

I saw him twisting a ring on his other hand with his thumb. The office started to fade.

“Lots of good bicycles,” he said. “But the first thing we need are better riders.”

Stephen Case is a graduate student in the program for the history and philosophy of science at the University of Notre Dame. His fiction has appeared in Beneath Ceaseless Skies, Shimmer, and Andromeda Spaceways Inflight Magazine among others.