“Easy enough to fake being an animal,” says Side-Lord. “Though, I admit, it’s a whole other thing to be one.”

The cage is hanging open and the guard stands shamefaced beside it, only the guard doesn’t have a face so much as a rift of writhing ganglia and beard of weeping tentacles. The ganglia are wilted, and the tentacles, extra weepy. That’s how you know there’s shame in the twisted brain behind.

Big Leader doesn’t speak this. He never does speak at all. His second-in-command, Side-Lord, does it for him. It’s as if Side-Lord can precept what his master is thinking.

“We were just talking,” mutters the guard. His voice is thick with the stuff of his weird making, but his words are perfectly intelligible. “And he got me going, going with him.”

“Oh, yeah?” Side-Lord leers. His best features are his eyes. So wide and lifeless. “What he say?”

The guard takes a breath, a death-rattle kind of wind almost. His whole life, due to certain eschatological fixations, this guard-thing has known how it all ends, without being able to affect it. 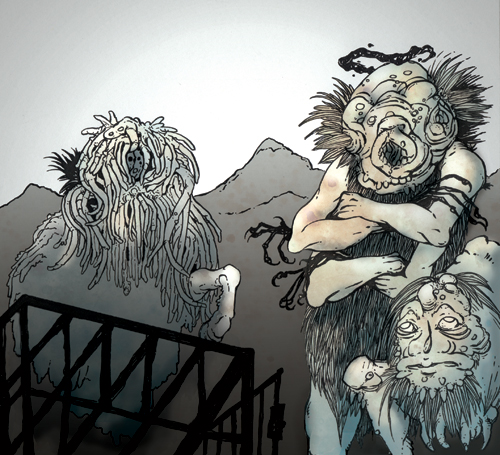 “He said, what with him being the last man on Earth, it weren’t right to keep him caged. That, not as an individual, but as a member of a species whose subject-consciousness and object-natures are founded on the notions of freedom,” he counted on one finger, “reason,” he counted on another, “and self-determination, that it wasn’t right to keep him locked up here with us mutant-monsters, and that I ought to respect a dying race and let him free.”

Side-Lord’s tongue hangs out when he grimaces; Big Leader has four arms crossed one over another on his chest.

“And you believed that shit?” Side-Lord snarls.

The guard scuffs the brown earth with one black hoof. Big Leader, meanwhile, nods meaningfully at the harshness of Side-Lord’s words. That was exactly what he was thinking.

They gather round the spoor to exult in its heady freshness, for the wet scent means they’re gaining. A brilliant day bakes the sand, the weeds, the shit, and whatever else is left of this future world, and this excites the trackers more. They know their quarry will only travel at night, terrified to let the sun settle on his weakling, purebred shoulders.

“Not long he’ll keep these pretenses up,” says Side-Lord, indicating the cleanliness of the campsite: The shit’s been buried in a hole, along with the ashes of a fire the running man stealthily burned. “Not out here with us all around him.”

“How’d he hang on to his humanity in that cage?” asks a different monster. This one’s made all of brittle bone on her outside, all her gooey soft parts trapped within. “I, for one, would certainly have lost all my monstrosity.”

“Easy enough to fake being an animal,” says Side-Lord. “Though, I admit, it’s a whole other thing to be one.”

Striding with big mute purpose, Big Leader whips out his monstrous cock and pisses in the shit and ash hole. Eager to follow his example rather than ponder why, the other monsters gather round brandishing terrible dicks or squatting with razor-lined vulvae, and unleash. Their piss is a steaming yellow froth that gathers in the wasteland’s dust.

They come to the Old Bridge, or where the Old Bridge once was. Somehow the man, in crossing, made it come undone. With his actions, he’d make his fording of the dark world a trail that no other could follow.

The green waters of the slow creek were filled with sludge and bobbing barrels exuding languorously toxic secretions. The waters might no more flow to the sea, but they would swallow solid matter just as effectively as the deepest abysm.

For monsters, such toxic stuff is cherry pie.

They dive in and swim across. Some of them, granted, choke and drown, and yet others fizzle and liquidate. But those mutants are the ones who’d be consumed by life’s exigencies anyway, and what ones can be rescued the other monsters drag to shore and then consume. Each death makes the others heartier, fuelling the fires burning in their bellies.

No one is wasted when everyone comes together for a purpose.

The monsters turn to see the line — the green, bursting jag — they’ve crossed. There were metaphors for this sort of thing, in the time before the world became pure danger.

Mountains next, leading to the high and lofty lands for which the man was always running. The trail switches back and forth, a slavering path seeking chaotic passes. Scree tumbles; boulders roll; on and up the ancient spines, hot and gusty winds breezily extol the philosophy of forever movement. The mutant beings that slither up the coast of rock all groan with anticipation.

Suddenly, motion from above. They’ve grown complacent. A trap is sprung, rocks rain down, and the vanguard of the twisted party is summarily crushed. There is bone, flesh and blood, other bits organic and the products of the general protean stew, now strewn across the pass. The man looks down on them from a cliff above, a raging black-eyed long-haired savage. But only for a moment; then he’s gone.

The monsters howl at the sides of their dead brothers and sisters. Now every broken one is sacred. But as their sorrow and their existential angst arise, their gory visions are turned into weapons by the process of radical objectification which dominates this future land. Holographic daggers formed from bone, pre-spattered with blood, leaking tentacles and fins, pinioned with feathers and extra eyeballs, appear in every monster’s hand.

“He’s killed now,” Side-Lord says. “There will be no turning back.”

They march up out of the mountains, to the sable rim of the tablelands of openness and freedom. At the rocky cusp waits a new surprise.

The monsters gather round. A nest of twigs has been robbed of the eggs it was meant to nurture; the rook or whatever bird dwelt here, killed. In the place of the nest’s old inhabitants are a pair of eyeballs: man-eyes, seeing-organs of the true-blood earthlings, appendages of the thinking mind.

One mutant pushes her way forward. She is slender like a whip, for she was born without bone, muscle, or anything but sinew. As such she is the thread that binds all things. Her mouth gapes and she speaks in one continuous, breakless breath.

“He just wants to do his own thing and this is what he’s offering us in exchange that he won’t be able to see because he doesn’t need to any longer and he thinks that if we see metaphorically that he doesn’t need to see that we’ll see we don’t need to see and if we let him live and don’t go after him he’ll never come back he’ll always be different he refuses to be like us and the only other way to have him is to kill him but he won’t be caged and God but he’ll try not to be killed too and we’d better rightly see that or fair warning’s sent.”

The mutants, until now a raging pack, still at this. Side-Lord squints, trying to divine what comes next. Then Big Leader laughs.

“This is the endgame,” he intones. He points to the wondrous land before them. A clean diagonal cuts between a dune of sand and a hedge of grass until the horizon wipes them clean. “He has to walk that line. He’s done it up ’til now, but without eyes to see his steps that wander between right and wrong, he won’t last very far. Oh, perhaps the gods will give him some little help … but they’ve better things to do. You know it and I know it. We’ve all walked that line before, and come back … but just alive.”

The mutants wait. They scuffle with each other in the grass, fuck with their weird organs in the dunes. They pass husks around from which they drink and eat and smoke, and follow the signs their campfires make in the night as they dance among misunderstood constellations. They wait and wait and wait so long they think Big Leader might be wrong. They start to think like men and women and not just beasts. They gaze along the radial line between the waste and all that’s green, and wonder what they might be if they’d wandered far enough from the well-considered middle track.

Then late one evening the man comes back. He shudders shabbily along, straddling the line with feet swathed in wasted wrappings. Things have grown from him, a fleshy shell of bright and blinding colours that wraps him up and keeps his gooey soft stuff on the inside. In place of his eyes have grown a microphone and a tape-deck, and he listens all night as the mutants tell him stories of their manhunt.

Only in the weakling morning does Big Leader wrap his arms around the transformed man, and whisper, “I was afraid you’d not return, my son.”