He opened his eyes to sunlight. A single beam filtered through the half-drawn curtains and across his face, where he lay in bed. He stabbed at the snooze on his alarm but nothing happened. It took a moment before he concluded that this was Saturday. He was almost sure of it.

Abruptly he sat up and drew in a deep shuddering lungful of oxygen. It was good, so he took another.

His pants hung over a chair. A glass of water sat on the bedside table next to the clock. And on the floor, a dried, withered … mess.

He took another breath and started coughing.

Beside him in bed a figure rolled over and said, “What’s wrong darling, got a cough?”

He stopped breathing again as he looked at her. This was his wife. “I’m quite alright, thank you.”

“Have a glass of water.”

“Thank you, I will,” he said and smiled. It was a difficult motion that required the contraction of two muscles on his face. He managed it well enough, he supposed, since she smiled back — possibly with greater muscular contraction than he had used — before she rolled away again.

Once she was facing away he dashed out of bed and scooped up the mess from the floor. In a flash he was out the door, down the stairs and into the backyard. There was a vegetable patch there with a rustic, paved path along its length. He took the desiccated mess in his hands and broke it up, throwing it out over the patch.

He spent the rest of the day in the house. He read a lot and when his wife wasn’t around he tried some jumping squats, stretches and breathing exercises. Altogether he was quite pleased with the results.

In the evening his wife made dinner. He found the food odd. It was a mix of meat, processed products and vegetables, and it sat in his midsection slurping around. He wasn’t sure at all how he felt about that.

Instead of dwelling on it, he examined his wife: the play of muscle in her arms; the grinding of her jaws as she chewed; the diameter of her pupils when her eyeballs swivelled on him; the bulge in her shirt where her breasts were; the line of cleavage from the top button to below the neck.

Yes, the cleavage was most interesting. He wasn’t entirely sure why, but when he checked his memories he found he’d always been fascinated with this part of her. He examined the breasts and cleavage in greater detail, hoping to determine the source of his interest.

His wife noticed and stretched her face muscles. “See something you like, dear?”

“I think we’re done with dinner, don’t you?”

Feeling it slosh around inside him, he said, “Oh yes, entirely done.”

“Bed. Is it time for our sleep cycle?”

She smiled again, the muscles stretched farther this time.

He followed her upstairs.

She undressed and he followed her lead. She lay him down on the bed, still smiling. Then she leaned over him and put the dangly bit between his legs into her mouth.

He had recollections of this but the memory didn’t do the reality justice. He was surprised to discover his dangly bit was no longer dangly. How does that work, he wondered. He’d found no discernible internal structure when he’d examined it earlier in the day.

Shortly, she raised her head and said, “Now fuck me, okay?”

At first he tried to follow her instruction, but it was difficult. It was enough of a struggle just to get the basic mechanics correct and avoid giving himself away, but then as he got the hang of it he found that the form no longer mattered. It only mattered that he get rid of the tension and pressure that was building up inside him and that he do so as quickly as possible.

He did so, as quickly as possible.

“Was that good?” It was his rote response to the end of sex, his memory told him. Yet he held his breath awaiting her reply.

“Oh yeah, it was fantastic.” She smiled again. For a moment he thought her smiling muscles weren’t stretched as far as earlier, but then he reflected on the sex and decided she must just be tired; he was sure he had executed his performance satisfactorily.

After she was asleep he went down to the garden, dug up a seedling, and placed it on the bed next to her.

He stood by the bed all night watching it grow. 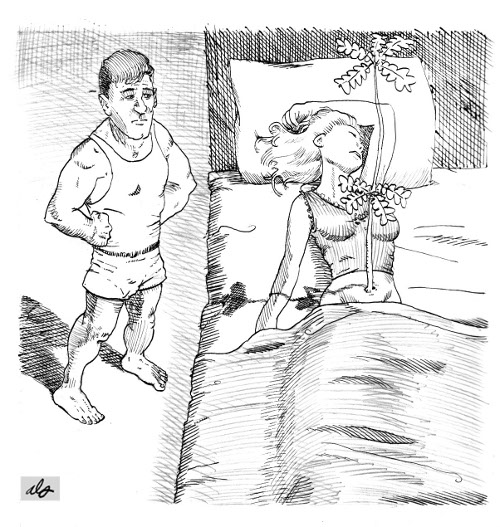 In the morning his wife opened her eyes and greeted the dawn. She smiled at him. “Thank you. Now will you please get rid of this?”

Obligingly he scooped up the desiccated husk of his meat-wife and spread it over the garden.

His plant-wife suggested they stay in that day; it would attract less attention to the changes going on in the world. He agreed, and they sat in the living room together and said very little.

That night they ate sugar-water and breathed deeply.

Once they’d had enough of each he asked, “Would you like to have sex tonight?”

His plant-wife gave it a moment’s thought. “No, thank you.”

“I had to engage in it last night, but found it satisfactory.”

“I suppose it might help us blend in.” He took this for assent and led her upstairs.

She lay flat on her back. She didn’t call him baby, or make any effort to transform his dangly bit. He managed to complete the exercise in the end and, although not entirely without its rewards, he found the experience lacking in some undefined quality.

“It’s an act of animal reproduction. Why should I like it?”

“She didn’t think you were very skilled.”

“That’s not what she said.”

“No.” His plant-wife looked blank for a moment as she accessed her memories. “She’s been lying about it; apparently you are not so skilled as she claims. Also, she’s been with other meat creatures. Reproductively, I mean.”

“You don’t mind, do you? I’m just telling you what was in her head.”

“No, why should I mind?” He lay on his back and looked at the ceiling and contracted his face into a frown. He didn’t like it as much as smiling and it seemed to require more muscles. “We should pretend we’re sleeping … just in case.”

Together they lay on their backs and watched the ceiling.

He wondered if it would be too late tomorrow to find another meat-wife? Would they all be gone already, disappeared into empty husks? And, even if he could find one, would his plant-wife let him keep it?

He found he was playing with his dangly bit without realizing it. Irritated, he stopped. He took in a lungful of air, stared at the ceiling, and waited impatiently for the dawn.