Callisto scoped the mat of grey hair on his twiggy chest and the bulgy veins all over him. She wondered if it was because he was dustyfooted or just because he was very, very old.

The airlock was strictly off-limits to unauthorized crew, but Ollie had some ancient clearance on his palmchip. Callisto slid the dilating doors shut behind her. The interior was dim and cramped. The walls were snaked with naked wire and slices of grease-yellow light leaked from aging fixtures. Hullsuits were dangling like lynched mannequins from the ceiling.

Ollie wasted no time stripping down. Callisto scoped the mat of grey hair on his twiggy chest and the bulgy veins all over him. She wondered if it was because he was dustyfooted or just because he was very, very old. 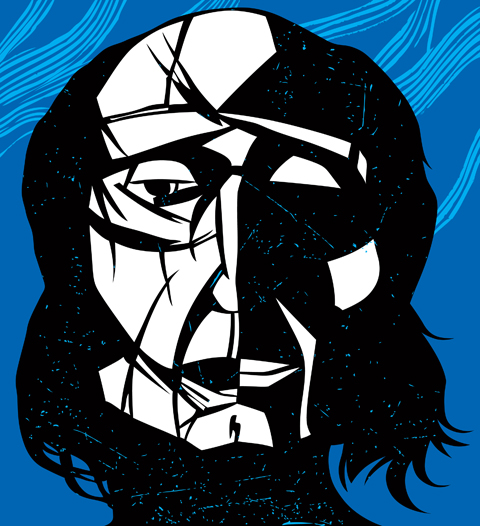 “Well, hurry on,” Ollie said, reaching for a hullsuit.

Callisto pushed into the hanging thicket, feeling the papery material between her fingers. She found her size and tugged it off the hook. “I’m not pure steady about going topside unkenned,” she admitted. “Bit dangerous, neg?”

Ollie’s face worked, as it always did when confronted with too much shiptalk. “Nonsense,” he said.

“If Skipper catches us out, we’re froze,” Callisto elaborated, not sure he’d understood her.

Ollie snorted. “Not our dad, is he love?” He sealed his suit and started running the diagnostic bar over himself. Callisto stepped into hers, tugging it up her shoulders.

“Are you pure truth a thousand years old, Ollie?” she asked, raking her dark hair back under the hood. Ollie was now on the lip of the airlock. The membrane quivered slightly, dull burnt orange. It did not look inviting. Ollie was sealed in, so the reply came by shipnet.

«Could be.» Then he levered down into the membrane and disappeared.

Callisto sealed her hullsuit, holding an instinctive breath, and dropped down after him. The gelatinous stuff was cool and tingling, pressing against her from all sides, seeping into potential fissures. By the time she slucked out the other end, up turning down, she was cocooned in slimy insulation. Like a fetus on birthday deck.

The ubiquitous shiply hum in her ears was guillotined by the vacuum, leaving an unnerving quiet. Callisto locked her boots in against the hull and tried to stand up. Deep space crushed her back down. She hadn’t been on many hull-walks and the sudden immensity was rearranging her internal organs. Inky space encompassed all directions, sewn with white-hot flecks of stars. She felt small, small, small.

Ollie was already striding away across the hull, a dim orange ghost. The skin of the ship had been unblemished when it set out — gleaming like a mustang, Ollie had once said — but now it dipped and rippled where the micrometeors had left their pocks and the composites had been built up over them.

“Ayeright, ayeright, no being scared,” Callisto murmured. She closed her eyes. Opened them. Ollie was still moving aft. Callisto hauled herself upright and made slow and cautious progress towards him. Past him, the scarred tableau stretched to a sharp horizon. She had never known anyone to walk it one end to the other, but she was sure it would take an hour at least.

Ollie was crouched on the hull now, pointing towards a vague star. He targeted it for her in her hullsuit display. «Like I told you.»

“Greatly far,” Callisto said, not really looking. She anchored herself down beside him and tried to breathe steady. She searched for the oxygen meter in the corner of her eye.

Callisto chanced a real look, following the virtual trajectory, but was disappointed. The old sun looked like any other star out here. She put the hood of her hullsuit against Ollie’s. “How was it like, then?”

“Dirty and vicious and beautiful,” Ollie said without hesitation. He paused. “I suppose you’ll understand once we reach the colony planet.”

“Be even better than Earth, I scope it.”

Ollie lifted his head away from hers, craning his neck towards the infinite black. «It won’t ever be full the way Earth was. Mixed blessing, that. You’ll never see real cities. Crowds. Waterfire festival. 2032. Beautiful, beautiful. Torches up and down the river, and the music, my God. Real music, from real instruments, made of wood and bone and coiled steel. Standing on the bridge, remember? Loads of people, coming from the downtown. Everybody right plastered.»

His voice was wavery, distant, by the end. It sounded like happy and sad mixed together. They sat for a while and stared at the fading star. Callisto leaned her head back against his.

“Is it pure lonely, Ollie?” She asked at last. “Being the last dustyfoot?”

Ollie chuckled, leaned back. «Still got you, haven’t I, Mer?»

Callisto felt a small icy plunge in her stomach. She opened her mouth, then shut it tightly. She was thinking of the proper thing to say when their hullsuits began to tremble and a disembodied voice ordered them back to the airlock, immediately.

She’d never had a summons to see the Skipper before. He’d sent it to her personal channel, not shipwide, and Callisto didn’t know if that was a better sign or worse. She tried to get her hair reasonable-looking before she palmed the door open. Best to be presentable for a reprimand. And other reasons.

The Skipper was using a gravity harness, limbs pumping up and down, and a body monitor display was splashed on the wall. Most of the other hands on ship made a token effort now and again — they knew they wouldn’t be in low-grav no-grav forever — but the Skip was religious about it. Muscles skimmed back and forth under his skin and Callisto almost forgot her salute.

The Skipper dropped down out of the harness and returned it. His face was well-sculpted but not for smiling. “Unauthorized topside jaunts are a pure serious thing, crew. Especially when we’re gearing to accelerate again.”

The Skipper nodded, eyes fixed. “I need to stab a few questions about crewman Oliver.”

“I had equal part in it, Skip. More than.” Callisto winced slightly, looking over the Captain’s shoulder to the colourful health display. “I wanted to scope the old sun.”

The Skipper raised his eyebrows but didn’t inquire. “This isn’t his first incident,” he said instead. “Oliver’s been erratic. Moreso lately. Have you noticed anything? Friend first, crew second.”

“He’s pure solid, honest,” Callisto said. She shifted from foot to foot. “Though, ah. Sometimes he does drift, like. Says a wrong name for me, maybe.”

Something jumped on the display and the Skipper turned, slapped it blank. His jaw was set. “We’re going to put him into cryo for the last leg,” he said. “I’ve been putting it off. But he’s unpredictable, and like such he’s a liability.” His eyes ticked back and forth and Callisto could tell he was issuing orders on the shipnet.

“It’s got to be done.” The Skipper threw another unsmiling salute. “Dismissed.”

Callisto returned the salute and was out the door. The antiseptic white of the corridor was a comforting pressure on her eyes after the hull-walk. Once she was around the corner, she ran. The ship was a warren of drops and ladders, but she knew them all and didn’t stop until she found Ollie in engineering. He was wrists-deep in the guts of some malfunct ventilator, swearing at it in his old dusty way. Tools were lined in meticulous rows by his feet.

“Ollie, I’ve just dog-offed from the Skipper’s and he says you’re erratic and they’re going to freeze you, you ken?” Callisto said it in a single slab of breath.

Ollie looked up, blinking owlishly. “That little bastard,” he said. “Help me hide under this shelf.”

Two crewmen ended up dragging him out of a tank in the hydroponic gardens. He swore furiously at them while he picked algae out of his wild grey hair. Callisto followed behind as they marched Ollie to the cryo deck. They stopped in front of the freezer doors.

“Well, see you on the other end,” said one of the crewmen, giving a weak smile.

“Been an honour, dustyfoot.” The other crewman paused. “Ah, Oliver.”

Ollie was silent as they walked down the row of cloudy coffins. His breath came in short puffs of steam.

The Skipper was waiting beside an open shell. “Uploading your abstract for cryogenic storage,” he said, tapping his head. “Ping acceptance when you’ve read it.” His face was stony.

“Yeah, yeah.” Ollie snorted. “You’ve been trying to ice me for years.”

“If Mer were here, she’d be damn well embarrassed,” Ollie said. He gave a fractured glance towards Callisto and then shook his head.

“She’s dead,” the Skipper said. “You were at the recycling yourself. And ever since then, you’ve been getting old fast.”

“Trying to hide me away. Keep me out of trouble.”

“Then what?” Ollie snapped, but his voice wasn’t so harsh.

The Skipper cracked just slightly, his mouth tugging sideways. “I’m going to need you later on,” he said. “Don’t know if I can do all this solo, you ken?”

They embraced then, an awkward thing of sharp angles, and Callisto saw the Skip’s face get undone on Ollie’s sagging shoulder. When they came apart, Ollie shrugged.

“Could rest a bit,” he muttered. He started stripping down. Callisto watched as he cricked his neck, clambered slowly up to the shell. Automated arms positioned him. “Wake me the damn second we touch down, though.” He glanced over to Callisto again. “And don’t let him keep you off the hull.”

“Ayeright,” Callisto said. The shell slid shut and preliminary sedatives clouded inside, obscuring Ollie in a thick white fog. The Skipper rubbed a thumb under his eye, then gave a sharp salute and left the freezer, striding tall.

Rich Larson lives in Edmonton, Alberta. His work has appeared in Word Riot, YARN, Prick of the Spindle, and The Claremont Review.