I stuck Grangy in my backpack and took him home.

What a freaking mistake that was.

Grangy was a real son of a bitch. I found him under a rotting log while harvesting morels several months back. Couldn’t say what he was for sure. Maybe a mixture of a duck, a frog, a catfish, and some kind of screwed-up woodchuck. I say that because of the ragtag concoction of feathers, smooth skin, rubbery lips, and buck teeth. But he is just the same, and he croaked out and flopped around helplessly when I lifted that rotting log. So I stuck Grangy in my backpack and took him home.

What a freaking mistake that was.

Grangy didn’t really walk. Or run. He just kind of lurched along on his belly, his gangly webbed feet useless. I don’t know if he had some kind of disease or what, or if that’s how he was. I’m still trying to figure out where he came from. I have a funny feeling (well, maybe not so funny) that he didn’t come from, you know, Earth.

Haha I hear you saying. Well ha-Ha back, you condescending prick. I’ve been collecting morels for ten years now, I’ve turned over a lot of logs, and I’ve seen all kinds of animals. But never one like this.

Like many people, I own a couple cats. Poncho and Lefty. Since the car accident they’ve kept me company. I lost my left arm and my lower left leg and got addicted to pain pills. Well let me say you find out real quick who your friends are. And it turned out the ones I thought I had were just party friends. Poncho and Lefty filled the void. They’re awesome.

That’s why I was horrified one night to hear Poncho caterwauling. I scooted into the back room and found Grangy lying on the bed, eyes buggy and rubbery lips glistening with saliva. He had half of Poncho’s leg in his mouth, and Poncho was batting at him real hard. Lefty was all hissing and scratching at Grangy, but Grangy hung on, blinking with each paw swat, eyes crossed and making laboured huffing sounds. So I pried open Grangy’s catfish jaws with my Leatherman tool. Poncho’s leg came out all slimy and a little bloody, but he healed up fine. After that I went out and bought a fifty-gallon reptile tank with what little savings I had. And that’s where Grangy lived. For a while.

I fed him. A lot. He ate me out of house and home, and I had to use some of my food stamps on him. Most of all he liked raw morels. Didn’t seem to cause him any digestive problems. His googly eyes would all light up when I approached with one. It was like this for a while. A good while. Grangy, Poncho, and Lefty existed peacefully. Heck, we’d munch popcorn and even watch Mad Men, maybe even a little America’s Funniest Home Videos. I looked back once to see Grangy staring at the tube, his crossed-eyes big and wide. 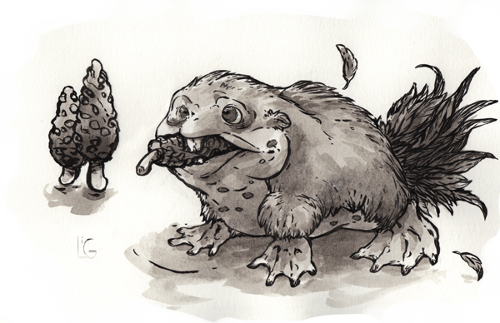 Over time, Grangy got bigger. The size of a bobcat, maybe. He started scaring Poncho and Lefty. And if he got out of that tank he could do more than suck on one of their legs, that was for sure. I tried to cut back on feeding time but I just couldn’t go through with it. He was so darn persuasive with those googly eyes and buck teeth, and the way he’d shake and shimmy when he got all hungry. So I fed him and fed him and put more and more books on the tank lid. More morels, too, in the tank. And more Wonder Bread. More Little Debbie Snack Cakes, then all kinds of crap I’d find in the garage like old magazines and tennis balls. The only good thing about that was I didn’t have to clean up his poop. Grangy ate all that.

A month ago I came into the living room and found his tank shattered. Glass was everywhere, but there should’ve been much more. Most of my CDs were missing, except for the Kid Rock ones. And my favourite cereal, Choco-Stuff-Goodness was gone, box and all. I found Poncho and Lefty on top of the fridge beneath the cabinet base, their eyes all wide. They hissed when I tried to reach for them.

I turned the house upside down looking for Grangy, but he was gone. I found a broken window pane in the bathroom and half the curtain missing.

That son of a bitch.

Ruined my house, busted up the tank I bought for him. After I raised him since he was a wee-bitty … well, a wee-bitty.

The morels are booming big time on the forested slopes behind my Northwest Montana home. I’ve been up in the moist, dark woods often, using my cane to get about and stuffing morels into my pack. I keep my eyes open though, more so than normal. And I check under rotting logs, too. I once saw a track (if you could call it that), a wide, lazy-looking drag through the damp soil and pine needles in my favourite morel territory. And one evening I heard a strange shucking noise down in a fern-thick gully. Since it was dark I decided to turn back. Poncho and Lefty might wonder where I was, and no doubt they were hungry.

But not as hungry as Grangy.

Last night, up in the woods I dumped my pack of morels. And I made a little trail with them. I’m not going to say where that trail leads. It’s just a trail, all right?

Michael Hodges lives and writes in Chicagoland, but often dreams of the Northern Rockies. A camping and animal nut, he has an infatuation with quality tents, much to the chagrin of everyone he knows. He is almost always working on novels.