She was touching the gazebo’s floorboards in that deliberate, gentle way you use to interface, translating her desires into electrochemical signals that our long-ago transmogrified planet could read. The floorboards obediently split beneath her fingers and a red tulip rose up from the crack.

I was sitting at X-L-R with Anemone and Riff, in a gazebo that Riff had drawn up — I don’t know, he had a thing for gazebos — when Anemone said, “Have you ever wanted to flatten your emotions?”

“Hell no,” said Riff. He rapped on a cedar post. Chips of peeling paint fluttered to the floorboards. “Then I couldn’t appreciate these babies.”

“Seriously,” said Anemone. “Rather than creating something to make you happy, didn’t you ever think it might be better to flatten your emotions instead, so it would be harder to feel boredom or unhappiness to begin with?”

Riff shrugged. He’d given himself wings that day, so the motion made them flap a little. “I think the whole point of omnipotence is, you know, doing whatever you want. And if you don’t want anything, then why bother? So no. Marcellis?”

“Well …” I said. I looked over at Anemone, at her eyes, the one thing about her that she always keeps the same and yet the one thing I never tire of looking at. “I haven’t wanted. I’ve actually done it.”

Anemone’s eyebrows went up. Riff actually gaped. I got on the metaweb and eavesdropped on their thoughts, but Anemone was only thinking, Oh?, while Riff thought, Man, just when you think you’ve got this kid figured out.

“Why would you ever want to do that?” asked Riff.

Feeling self-conscious, I glanced over at Anemone again. She was touching the gazebo’s floorboards in that deliberate, gentle way you use to interface, translating her desires into electrochemical signals that our long-ago transmogrified planet could read. The floorboards obediently split beneath her fingers and a red tulip rose up from the crack.

“It obviously wasn’t so great,” pressed Riff. “I mean, you eventually changed your mind and got happy again. — Anemone?”

Her eyes had gone still. My mind followed hers onto the metaweb. She was downloading a primer on flattened emotions. “If Marcellis has tried it, then I’m going to try it,” she said. She came back fully and smiled at me. “I think pleasure might feel better if it’s harder to come by.”

“Are you serious?” said Riff. “That’s stupid. Happiness is happiness. It’s chemical. As long as you keep your receptors sensitized, you don’t need some external contrast to make it feel even better.”

But Anemone closed her eyes. 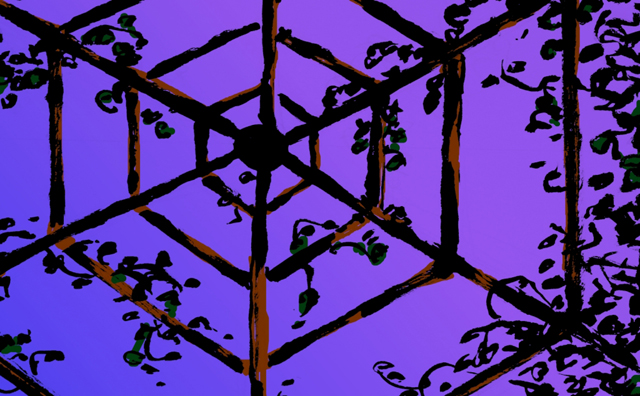 Riff grew bored. Or maybe annoyed. “I’m off,” he said, and went down the pair of steps. I watched him walk and then fly in the direction of X-K-R, remaking the landscape from someone else’s rain forest to rolling plain as he went.

When Anemone opened her eyes her face was blank. I was worried she’d done it wrong. I was just starting to wonder if she had a recent backup when she said, “Oh.” She gazed at the blossoming tulip, rising from the crack beside her hand. She didn’t say anything else.

I remembered what had happened when I’d flattened my emotions, and I’d reacted pretty much the same way. Like nothing especially mattered one way or the other. Not in a bad way, exactly — there was just no meaning to anything. Even talking. Or other people.

I stood up to leave. She’d probably get tired of staring at the tulip in about fifteen minutes and then wander off to stare at something else.

That’s how it went for me.

I looked across the rolling hills at a haphazard trail of tell-tale gazebos. Riff was out of sight. Anyone could be watching on the metaweb, but they wouldn’t interrupt a private moment. We were culturally alone, which I imagine is as good as the real thing. “Give me a minute,” I said.

It had been a couple centuries since I’d tried it, and last time I was a traditional masculinized male and had a different brain structure, so it took me longer to adjust myself than it had taken her. But once I finished, that old blank feeling came down, and when I opened my eyes, everything was different.

Slowly, I sat back down, on the faded floorboards warmed by the sun. They should’ve felt nice, but they just felt like … themselves. Neither good nor bad. Accidental.

Anemone and I stared at each other across the lone tulip. I knocked on her mind. She let me in and I showed her that I’d flattened, too.

“Can’t you feel it? There is no ‘Now what.’ Nothing matters. Including the question.”

We sat there in numb and baffled silence. Our infinite power and immortality hadn’t changed, but everything around us was suddenly all the same: crap. Just homogeneous crap, in different forms that moves around and does the same quantum stuff over and over, because that’s the universe. And that’s all there is.

“This is awful,” said Anemone. “This is what we’re doing? We evolved and struggled, and trillions of our ancestors died forever, and we turned the whole planet into a supermatter lattice that takes us anywhere we want, and now we’re just … sitting in a gazebo?”

“I can’t stand it. This can’t be the culmination. What can we do? Is there anything that matters anymore?”

“I don’t know,” I said truthfully. “We’d have to find some meaning in something to be sure.”

“But where do you find meaning?”

On a whim, I went metaweb and searched for meaning.

Anemone followed me. We downloaded a lot. Ideas, debates, theories, treatises, abstract montages, artwork, papers, encyclopedias. We have a lot of memory, but it’s not infinite. We went through it all, condensing and discarding, slowly — since flat data can’t make connections with itself — trying to fit it all together. We argued about the large points and the small ones. Neither of our bodies needed sleep; we didn’t care enough to change the appearance of our locally simulated sun; and we all stopped needing to eat long ago. So we just kept going.

A lot of time passed.

When we ran out of knowledge objects that had been separated from their makers, we started looking through living people for meaning. That was a lot harder. An essay can have a main argument, but whole people believe contradictory things. I found it frustrating. Anemone liked it. “There are more ways of interpreting a whole person,” she said, “so there’s a greater chance of finding something.”

But it was dumb. We found crap.

Eventually I suggested looking in the planetary lattice itself for meaning.

“The only data the lattice has is its physical configuration,” Anemone said, “so I bet we’ll have to just listen to it for a while before we even get an idea of what to look for.”

“How will looking at noise help at all?”

“What if it turns out to be more than just noise?”

Someone knocked on our minds, loudly.

We looked up. Riff was strolling toward the gazebo. At least, I thought it was Riff. His anchor point is his silver teeth and the sabre-toothed lion coming toward us had teeth that gleamed metallic in the sun, so you’ve got to make an educated guess.

I looked at him funny. Riff isn’t sorry about anything, but he looked like he meant it this time. In fact he looked mortified, like he was breaking some taboo.

Then I noticed the rest of the place. X-L-R, and all the other coordinate territories I could see on the X shell from here, had been flattened into smooth, black glass.

“Andromeda is gonna hit us soon, so we have to move the lattice to another galaxy. We need all the extra supermatter to make the timesails.” Riff hesitated, then added, “I told them not to take your gazebo. But the assholes on the outer shells don’t care crap about tradition.”

Anemone blinked at him. “Tradition?”

“Or legend. I dunno.” Riff twitched a feline ear. “I mean, you have been sitting in the same spot for two billion years.”

Anemone and I looked at each other. It had been that long? “But we haven’t found meaning yet,” said Anemone.

“That’s what this is about?” Riff asked. He sat back on his haunches and curled his tail around his feet. “Look, uh, we’re kind of pressed for time here, so can’t you just come out of it and finish looking later?”

Anemone gazed down at her tulip, still fresh and blooming. She interfaced with the boards again and drew up a thornless rose. “I guess we can come out of it,” she said to me. “Doesn’t really matter, after all.”

“Nothing does,” I agreed.

We came out of it.

When I did, I got flattened in a different way. Two billion sprawling, struggling years of cross-referenced, compiled, interconnected data on everything hung together in my mind, the same as it always had, but now it was lit up and electrified from within, illuminated and limned with everything that had been missing. Wonder filled the gaps. The tulip and the rose, me and Anemone, even the smooth black lattice — we were all complete in a way I’d never seen before, igniting each other with joy, a bonfire the size of the universe. It was power beyond power in infinite motion. How could I have ever said this was all homogeneous crap?

In this moment — with no new information — it all made perfect, flawless sense.

I lost a few precious seconds. When I came to, I was clutching Anemone’s picked tulip, and she was holding the head of the rose in her palm.

Her expression was soft and amazed. “I get it. The universe is the engine. But feeling is the fuel.”

The stem of the tulip was silk between my fingers. “You mean —”

“Riff was right.” Anemone grinned. “Meaning is everywhere, but not without happiness to complete it.”

I nodded. What else could be said? “Should we upload this?”

KJ Kabza’s stories have appeared in Beneath Ceaseless Skies, Daily Science Fiction, Flash Fiction Online, and others. He has work forthcoming in Fantasy and Science Fiction.