The 59th annual Hugo Awards were presented last week at LoneStarCon in San Antonio Texas. The award for Best Novel went to former SFWA President John Scalzi’s Redshirts and the John W. Campbell Award for Best New Writer went to Mur Lafferty, presumably on the weight of The Shambling Guide to New York City. Now, the Hugos are decided by public vote, so there is a certain shift in the base of judges every year but, nonetheless, these selections are noteworthy.

Particularly, it’s interesting that the two most prominent awards both went to works of humour. If I’m not mistaken, this marks the first time that the Hugo for best novel has ever gone to an unambiguously comic work.

Humour and science fiction are old bedfellows. Isaac Asimov was a great believer in the comic and, though his more acclaimed works aren’t known for being particularly funny, he also penned a great number of jokes, limericks, and bawdy songs. Later Douglas Adams would embrace absurdist comedy in The Hitchhikers Guide to the Galaxy, which has gone on to become one of the most popular science fiction series ever published. Too often, however, these works have been complimented backhandedly as “fun,” implying that they cannot also be “serious.”

That Redshirts has been selected as the best novel of the year, beating out weighty works like Kim Stanley Robinson’s 2312 is a strong statement that science fiction fans are either embracing their chosen genre as something fun or, my theory, recognizing that, in a literary tradition founded on equal parts starry-eyed optimism and biting social critique, outwardly playful works of satire can’t be easily disregarded.

Okay, maybe the fun theory has some merit too. 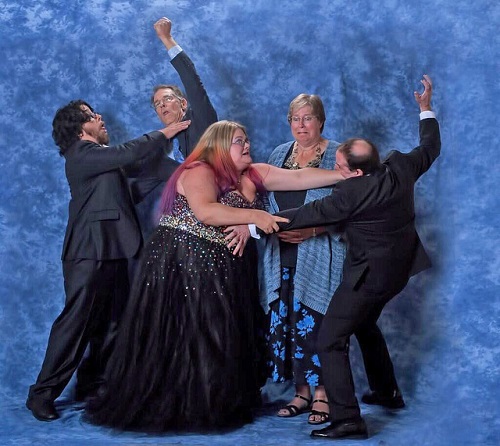 When Forbes magazine endorses a novel by saying that “You don’t have to be a hardcore sci-fi fan to enjoy Redshirts ,” and The Guardian then quotes them in a wink-nudge fashion to criticize the novel for not being sci-fi enough, the game becomes difficult to untangle. Should we hate it for trying to please, or love it for being approachable? Science fiction has spent a lot of decades struggling with exclusionist tendencies, and it’s easy to feel that if people who aren’t in the club appreciate it, then it doesn’t count.

This is perhaps nowhere more keenly felt than in the Best Dramatic Presentation category of the Hugo Awards. In the last two decades, the film industry has taken a dramatic shift, driven largely, I imagine, from a desire to show off ever-cooler CGI, towards science fiction blockbusters. Major studios put out film after film for mainstream audiences that are set in science fictional worlds. And so, whereas the Best Dramatic Presentation award was once a forum for recognizing difficult films like Sleeper, A Clockwork Orange and Slaughterhouse Five, it now rolls out the carpet for megahit juggernauts like Inception and The Avengers.

Of course, Inception and The Avengers are both excellent films. And Redshirts is an excellent book. Humour and action are making science fiction mainstream, and seeing the walls of the SF ghetto crumbling is of far more value than any notional value from hanging on to a cliquish sense of import.

Below is the full list of 2013 Hugo Award winners and nominees.