Her awareness flickers from one remote to the next. Signals from a single jelly grow brighter while the rest dim, like putting all of her focus into a toe, but still being aware of her hands, and then shifting focus to a hand, but still knowing the toe was there.

Except this is better than toes and hands. 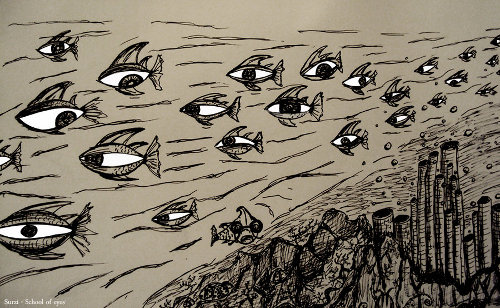 At age six Lisa decided she wanted to be an animal — furry and fast and able to hang upside down from the trees like the squirrels, or sink into the mud like the frogs when the other children asked why she was so quiet, or simply know what smells fascinated dogs.

That feeling never went away. When her skin grew hair she kept it there. When the other girls began presenting their bodies for attention, she only felt a small sickness bubble inside.

She can’t accentuate with clothing and makeup — her shape is just wrong. Mirrors bring disgust. She wants to be something else.

Tentacles walk over the yellow-white mounds of methane clathrate that poke through the silt. They taste the frozen gas beneath, feel the pressure and temperature of the water above, and channel numbers into .txt files that are transmitted to the router chain leading to the surface along the pipes. Barrel-thick tubes plunge into the gulf floor, delivering an injection of heat and soaking up methane and sulphur in return.

Feather-oared worms saturate the honey-combed ice hills. Lisa sees the native polychaetes from seven simultaneous angles as her foreign probes diagram the environment. She feels an affinity for the creatures, subsuming them as her sensory network covers the region.

She hasn’t been this distributed since controlling the drone swarm above Chicago, licking the ammonia, oxides, metals, and particulate matter, receiving so many new tastes at once. There she was a cloud over Lake Michigan. Here she is a school off the coast of Louisiana. Her body lies on the mining rig at the surface, but her consciousness disassociates 550 meters below, with the worms. The data from the probes pour into her brain while her own senses are blocked.

There is liberation in bouncing from robot to robot through the temperature gradients, so unlike the land where her skin feels too tight. It clings to her cheeks, stretches around her biceps and forearms, compresses her legs, like ill-fitting clothing. She must rotate her joints to reposition her outer layer, to adjust the human pressure suit.

She shaved once: her legs, armpits, scalp, eyebrows. Anything to become androgynous. It was satisfying for a time. She learned clothing and makeup can distort. She learned she could cut her fingertips open and place magnets inside, let them jangle nerves. Feeling the fields around electronics was her first experience of a new sense. It was like tasting water after living a life of dehydration. Then came more implants, deeper in the nervous system. Eventually she learned to feign normal, at least a few times a year and for long enough to win a new contract.

Gas percolates from the sediment, escaped from the mining rig’s absorption. If the process grows out of control, the deposit will boil up, suck oxygen from the water column, and ignite on the surface. She watches for signs of pending disaster, ready to alert the response team. It is such delicate work to free methane from the ice lattice that traps it.

Her dysphoria isn’t something surgery and stem cell therapy can alleviate. They merely provide variations on the same outline. Pull this part in, grow this one out. She doesn’t want the part at all. Her phantom limbs are of another species. To be human is such a burden. The sight of two hands in front of her, feet leaping out as she walks, unnerves her. It is not the same as grasping with shape memory alloy arms, as seeing from a multitude of eyes.

There is relief here, among the clathrate worms.

Her mind switches perspectives, moving from synthetic jellyfish to plastic cephalopod to something surrounded by glowing monitors and a paint-flecked ceiling. It takes her a few seconds to realize she is back in her body, reclining in a chair on the rig. The transition is so smooth it confuses her. Coming back is never smooth.

In the mess hall, Emmitt and the other engineers laugh. Their voices rise above the background of conversation like when cetacean calls wash over the sound of seafloor fracturing.

A company sweatshirt drapes over Lisa’s small frame like a clothes hanger as she taps each finger, one at a time, on a cup. Something has changed. She feels the bones articulate at joints, sees the tendons shift under her skin, and wonders how long these emotions have been building, only now becoming obvious.

The crew sees her as sullen. The miners are too foreign for her marginal small talk skills. She prefers the company of extremophiles, and on other occasions eagerly awaits the chance to return to the monitoring rooms. But today is different. She concentrates of the movement of her fingers, perplexed by these feelings.

The lunch chatter breaks her self-examination. “Your phone can’t hold its own in conversation,” Emmitt says to the others. “That’s not consciousness. We’re nowhere near understanding how human minds work.”

“That doesn’t matter,” she says, glancing down the metal table. The engineers don’t notice. “It doesn’t have to be like us,” she says louder. They look at her, surprised by the voice.

“Then what’s it supposed to be?” Emmitt asks.

She hesitates, everyone focused on her, then spits out, “There’s been intelligence here for hundreds of millions of years—in ant colonies and fungal networks, billions in quorum sensing bacteria.”

Emmitt raises an eyebrow. Her heart tightens and throat swells with anxiety.

“We’ve built an ecosystem of machines that are as conscious as any organism.”

He laughs. “You’re spending too much time in the remotes, girl. You need to come up for breath more.” Everyone chuckles, but she isn’t embarrassed. If they only knew what that time away has given her.

She extends her fingers and then runs them down her forearm. When she came back today, it didn’t feel alien. It didn’t even feel like coming back. She has become so accustomed to the invertebrate shapes, to the radial symmetry, to the robots’ points of view that her own body has ceased to be a prison.

Out of the mess hall, she focuses on each foot as she moves, balls and toes striking the ground through her boots. She wants to run. Sometimes miners jog around the helipad. They’ll stare at her, wonder at the sudden extroversion, but she’s too excited to care.

She slides her fingers through her hair and takes comfort in the sensation, for this body, her body, is just another probe to shift her mind into, just another option. For the first time, she admires it.

John Zaharick’s fiction has appeared or is forthcoming in The Colored Lens, Not One of Us, and Allegory and his poetry in Strange Horizons.