The lobster was tucked in against the trunk, at chest height, almost politely, yet as obvious as a magazine in a supermarket checkout stand.

Six thousand feet above sea level in Banff National Park two wardens paused at the side of a backcountry trail. Their exhalations steamed in the January air as they stared at a tree ornamented by a two-pound Atlantic lobster in a resealable plastic bag.

“I’ll get this one,” Rick said, unslinging the harness to the skier rescue sled they’d brought with as a training exercise.

“If I reported this, I’d feel pretty sheepish,” he noted.

Snow had fallen since the ski tracks diverged from the main trail to the lowest branch of an alpine fir. The lobster was tucked in against the trunk, at chest height, almost politely, yet as obvious as a magazine in a supermarket checkout stand. He picked up the lobster, glanced at the sled, imagined how the rescue scene would look to a passing skier, and stuffed the crustacean embarrassment into his backpack.

“No,” Niles said, “I’ve never seen anyone take that much trouble to protect litter from freezer burn.” He helped Rick back into the sled harness. “Still, that makes me wonder if we might need this sled after all. Somebody who throws lobsters away shouldn’t last long out here.”

“A condemned man is careful when he orders his last meal,” said Niles. “People who know they’re going to die are the ones who put their affairs in order.”

“Seems more like people putting things out of order to me,” Rick said, as they skied up the trail again, scanning as they went.

“Clubs aren’t made up of anarchists,” said Niles. “Hardcore backcountry people don’t make trouble, and pranksters don’t get this far from a road, even in summer.”

“Maybe it could be somebody making some sort of protest statement, about the decline of the fishery, say.”

“I don’t see how they’d get decent press coverage out here,” said Niles. “Besides, this isn’t how scientists or activists think. It breaks the First Law of Environmental Conservation.”

“Okay, I’ll bite,” conceded Rick, after a few strides. “What Law is that?”

“There’s no free lunch,” Niles said, turning his gaze from the bush long enough to wink. 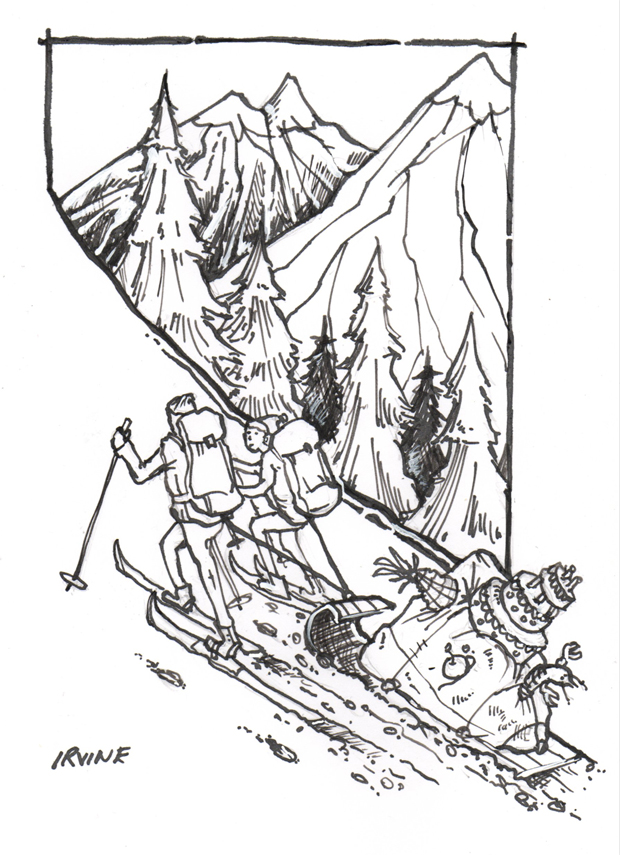 “There’s another one,” said Rick.

“I’ll get it.” Niles returned with a dozen assorted doughnuts in an unzippered bag.

“Well, that’s a thoughtful vandal,” noted Rick. “Maybe he won’t convince you that he’s giving food away, but he’s trying.”

“We’re wardens, not cops.” Niles put the doughnuts away before Rick could examine them. “Whoever did this doesn’t have a clue about the backcountry.”

“Do they have filling?”

“Who cares if they have filling?”

“You can eat a cruller or a cake doughnut practically straight out of the freezer,” said Rick, failing to make his interest sound purely scientific, “but your cream- or jam-filled doughnut, that’d have a right hard frozen center in this weather.”

“If these foods comfort, it’s without being eaten.”

“I think somebody’s home is never going to be the same even if they can follow the food back to it.”

“The brothers Grimm,” said Rick. “People getting lost in forests and all.”

“Right. Somebody’s dropping lobsters like Hansel’s crumbs, but Hansel and Gretel got rich and went home. This food dumper is rich already, but still starved.”

“I don’t see how this is going to end well,” said Niles.

“That’s only standard for you. How much worse can it get?”

“It can always get worse.”

The next stop yielded a Dungeness crab, which, strangely enough from Rick’s point of view, seemed to lift Niles’ spirits. When Rick’s turn came for the next pickup, though, he did his best to stuff the food away before Niles could see it.

“Damn. Those are expensive.”

“You keep my favourites and I’ll keep yours.”

“But mine cost more.”

“A calorie’s a calorie out here, Niles.”

“I guess that if something can be eaten right away rather than having to be cooked, that does send a different message.”

“Or the medium’s the message.”

“So we can’t understand the message unless we eat it?”

“Considering what you know about me and doughnuts, I won’t answer that one.”

“Just trying to keep you from temptation,” said Niles. “This food could be poisoned for all we know. Ready-to-eat food, especially.”

“What would make you think that way?”

“The fairy tale similarities, I guess. Also, it’s getting pricier and more tempting as we go along, and there’s not a brand name or original package in sight. That spells tampering to me, surer than Snow White’s apple.”

After several miles of their strange biathlon, the two started to feel the weight of their accumulated loads and looked forward to dumping them inside the familiar green walls of the next warden’s cabin. On their final approach however, it became apparent that those walls had turned reddish brown, and that food wasn’t the only thing on the trail that had been repackaged.

They skied in silence to the doorstep of the cabin and both just stared awhile.

“We could be tracking someone who has a few issues with authority,” Rick finally ventured. “Maybe we shouldn’t report this right away.”

“What would we say? ‘Help, our cabin’s been gingerbreaded’? Anyway, if we stockpiled the food in the cabin, it would just reinforce the statement that the gingerbreader is trying to make.”

“Which is?” Rick checked the ski tracks around the cabin. It remained clear that they were dealing with only one perpetrator.

“The witch lived in a house made of food and had plenty to eat, while Hansel and Gretel were starving. I’d say we’re being cast as the witch.”

Rick pushed at the outer layer with his ski pole, and twisted until he penetrated to the wood beneath. “Maybe just a bit witchy,” he noted. “It’s more like gingerbread siding.”

“Whatever it is, it took time for him to put it up,” said Niles. “The exit tracks are more recent. The witch used her house as bait, but we have a chance to catch up with the breader instead.”

“No sled tracks, and only one set of skis. It’s more likely a man, based on how much weight he must have carried.”

“The tracks are no deeper than ours, and they’re the same coming out as going in.”

“Are you trying to tell me that somebody just conjured the food out of thin air?”

“We’d better talk while we ski, Niles. We’re not going to catch whatever it is by puzzling on the spot.”

They got into their skiing rhythm again and continued on.

“Maybe how the trick was done isn’t really the point,” offered Rick. “Maybe it’s how the breader wants us to think that matters.”

The food-strewn path could have led them toward Skoki Lodge, but instead continued along the less traveled parallel valley.

“Looks like he’s headed for Baker Lake one way or the other,” said Niles.

“Best place name around for a guy who makes gingerbread, I guess.”

“I don’t see why he’d approach this way, though. If you want to make people think about myths, why not take the short way through Merlin Meadows and over Deception Pass?”

The two men talked less and less as they made their final ascent toward the Baker valley. Their packs filled and the pile of food on the sled grew. Where the tracks diverged to make food dumps, fresh snow covered the parallel tracks left by previous skiers. They put skins on their skis to keep from slipping backwards and took turns pulling the sled, but still strained to make the summit.

“It’s like some twisted parody of the Scott expedition to the South Pole,” puffed Niles. “There aren’t any mythological people who perish from hauling too much food, are there?”

“Time’s the problem in lands of plenty,” said Rick, as they picked their way down toward Baker Creek. “When visitors leave, all the aging they missed catches up with them, and they die on the spot.”

“So you’re saying to go back, rather than to Boulder Pass?”

“I’m saying there may be no going back.”

“Cheer up, Rick. It could still be just baiting us with food so it can eat us later.”

They’d passed above tree line. In the open, the food caches seemed farther apart. At the junction below Deception Pass, though, the breader made up for the lull.

“Now that’s different,” mused Niles, as they stared at the miniature mountain. “I’ve never seen a cairn made of food before.”

“A tad wide at the bottom for a cairn, isn’t it? Four sides with rounded corners, sorta like a pyramid.”

“A food pyramid? That’s a lot of work for a statement about proper nutrition.”

“Not even proper. It’s missing too many tiers of vegetables and such.”

“There’s no shortage of nuts. Maybe it represents the builder’s brain.”

“Pharaohs buried food in their tombs. What about the reverse?”

“The pile’s not tomb size, unless it’s a baby inside. Look at all that pizza and fudge. It’s more like if a suicidal teenager was planning to eat himself to death.”

“No depressed teenager on a diet of comfort food is carting this much weight up a mountain.”

Niles hung his head and looked away.

“Niles, ain’t no man alive carting this much weight up a mountain.”

“Then you tell me how it got here.”

“Maybe somebody’s trying to make us wonder what the world would be like, say, if the mountains could feed us.”

“This isn’t a legend to whoever made it, Rick. It’s real.”

“And more’s the pity, Niles. If you could make mountains of food, who could you eat with? If you were ever young, where would you feel safe? The best people might do is imagine you far away.”

The two of them turned their backs on the Sawback Range and looked west, where they knew the sun was setting, but the sky had turned overcast again, and a distant curtain of falling snow blocked their view.

“Who or whatever we’re dealing with,” said Niles, “it’s our job to meet it first. If it wants to feel at home, we can’t leave this heap unattended, and there’s no way we can get it to the next cabin.”

“We’re not in the world with our cabins anymore, Niles, not if we want to meet him. We’re where people play all day and no one grows old, and there’s food all around and the leaves never fall.”

There was snow enough for a cave, fat enough for a fire, but the two neither dug nor burned. Despite the exertions behind them and the sixteen hours of darkness ahead, neither man touched even the rations he’d brought with him. As if politely awaiting a dinner guest, the two of them pitched their tent beside the inscrutable pyramid and huddled inside, stomachs growling, as the wind began to howl.

Ivan Dorin has had his work included in the online high school English course of the Government of Saskatchewan, on CBC Radio’s Alberta Anthology radio program, and in Tesseracts Thirteen, Evolve Two, On Spec, GUD, and Vox.