The Three-Century Sage taught me everything he knew. A hundred years later, the Four-Century Sage realized what I’d done with that knowledge, and struck out determined to set his pupil to rights.

The Three-Century Sage was dead, and there was something smug about his corpse. Recumbent on his futon, snugged up to his chin in animal furs, he wore a smile that seemed to say, “My bed’s more comfortable than your bed, and now I’ll never have to leave it.”

I knelt on the straw-strewn stone floor and felt for a pulse at his throat. Under his beard, his skin was taut and chilly. His hair was gunpowder grey, long, thick, and glossy, and he had it about everywhere a man can grow it. I watched my watch. The second hand ticked past the twelve once, twice, three times. Nothing. I held the watch to his lips, close enough to kiss. No mist on the face.

Six thirty-one a.m., local time. The Three-Century Sage was mortal after all.

Just as well it took so long to get an audience, I thought. If his keepers had let me through a week earlier, maybe he’d have hoodwinked me with his sham immortality. What might he have extorted from me? Money? Sex? Secrets?

I pushed aside the hide that covered the mouth of the grotto. Early morning sunlight slanted in, followed by ozone-scented alpine air. The dead hermit yawned. 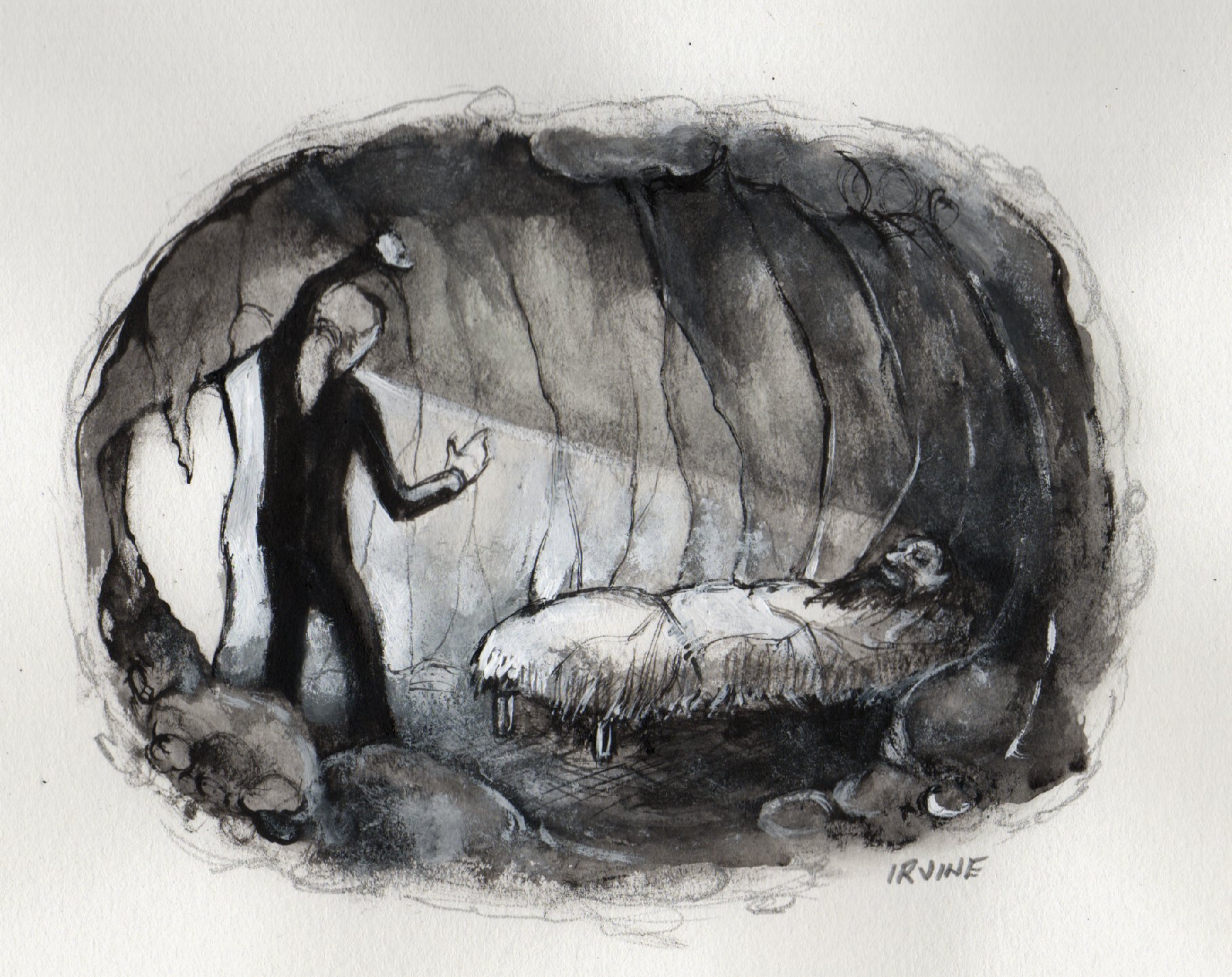 I let the hide drop.

Still yawning, the Three-Century Sage heaved the heap of furs aside and sat up, cross-legged. His goatskin tunic fell open to reveal an orange thermal vest.

“My humblest apologies.” He spoke English with an accent stranded in international waters. “I was dead to the world.”

I realized that the face under all that hair was youthful. Late twenties? Thirties at most. Barely older than me. And his eyes were mischievous as a ten-year-old’s.

“I’ll admit it,” I said. “That’s a pretty good trick.” I crossed the grotto in a step and collapsed into the Lotus position, facing him. “So what is it? A fugue state? Hibernation? Suspended animation?”

“Nothing so complex.” He was all false modesty: head bowed, palms displayed. Humble but for the sidelong look, checking the audience was following the routine. “It wasn’t a trick. It was a demonstration. When you arrived, I was dead. Now, you’ll notice, I’m not.”

He smiled like a man leading a blindfolded lover to a surprise tryst, his shoulders bobbing with glee. “I was born three hundred years ago, but I’ve only been alive for thirty-one years, seven months, four days, and nine hours. And nobody can die and come back.”

“You’re not making any sense,” I said, shuffling forward until I could smell the oils in his hair, the better to read the face nestling within it. “You say you were dead just now. I think you’re saying you’ve spent most of the last three centuries dead. But if you don’t believe people can come back from the dead —”

“People can come back from the dead,” he said, nodding furiously. “Coming back from the dead is easy. It’s dying you can’t come back from. Death is just a state. Dying is a process, irreversible once it starts. The difficult part is getting from living to dead without dying.” He spread his arms wide: a salesman at the climax of his pitch.

I deliberated in silence. Crazy? Absolutely. But it had the lustre of originality, which I’d surprisingly often seen accompanying truth.

“So that’s what you’re selling?” I said. “How to transition between the living and dead states without … triggering the dying process?”

“I’m not selling anything,” he said, looking pained. He was silent for a moment, and all those years he’d forfeited seemed to pour back into him. “We’re talking about diluting your life, you understand? If you want to live for longer, I can’t help you.”

“I don’t want to live forever,” I said. “I just need to be alive a thousand years from now, and I’m not fussy about what happens in between.”

Curiosity tinged his features, and with it, a little of his earlier vigour.

So I told him about my life’s work. About the seeds I’d planted, and what they’d grow into one day. I painted him a picture in magma orange, sea green, and rainbow coral: a picture of a world without spiders or leeches or rats, without hemlock or nightshade or digitalis, without HIV or gastroenteritis or the common cold. But a world riotous with life: nutritious life, medicinal life, loyal life. The world God would have created if he really had loved us.

“There’s nothing to do now but wait for everything to mature,” I said.

“You wouldn’t be the first person to be outlived by her ambitions,” said the Three-Century Sage. He was grinning. “Why does it have to be you that puts the cherry on top? Can’t you appoint a successor?”

“That many years down the line? Instructions get lost, or garbled. Besides which, I planted the seeds; I want to taste the fruit. I think that’s reasonable.”

“Really? It sounds a little selfish to me.”

“No more selfish than what you’re doing,” I said. “Or were you going to share your esoteric knowledge without asking for anything in return?”

“I still haven’t said I’m sharing at all.”

For a moment he looked indecisive, and I wondered whether I’d misjudged. Then he said, “I’ve never actually taught anyone else how to do it before. None of the other supplicants were suitable. I’m not sure I know where to start.”

The Three-Century Sage taught me everything he knew. A hundred years later, the Four-Century Sage realized what I’d done with that knowledge, and struck out determined to set his pupil to rights. But it was the Nine-Century Sage who ran me to ground in the bowels of Tor Galileo.

Even from over a klick away, through curtains of rain, I could see that Tor Galileo was stunted, just like the others. It should have been a thousand metres tall, spearing sheer-sided out of the sea, sheathed in ciliated flesh, and armoured with scaly lichens. As I banked closer, I realized not even the coral skeleton was fully grown. Naked splinters of new growth barely scraped the stormclouds.

“Should’ve prototyped it in miniature first,” I said. The voice is a muscle: Stop using it and it atrophies.

I tethered the glider to the sturdiest splinter and clambered down the coral lattice into the fleshy chimney. The wind played the Tor like breath over the mouth of a bottle. Down here, the rain fell like a veil. My knees popped and my thighs glowed with the exertion.

I found the seed at sea level. It was the same fist-sized thing I’d planted centuries ago, but now it was the nucleus of a gelatinous globule the size of a small car. It was suspended in a web of white filaments that spanned the chimney. The strands were so tightly woven that the web gave only slightly under my weight. Squatting by the seed, I opened my jacket and hunted through my bandoleer for the right syringe. Through the web, I could see darkness: the continuation of the chimney to the seabed and beyond.

I jabbed the needle into the globule and pushed the plunger.

The Nine-Century Sage dropped onto my back.

He tangled his legs around mine. We bounced and rolled across the web. I ended up on my back, with his bony knees on my shoulders. He was shrivelled and brown and hairier than ever, like an old lemon. I couldn’t have looked much better.

“Bring them back.” His voice was desiccated. Clearly he hadn’t been talking to himself enough.

“It’s not safe here.” The seed was already starting to pulsate, assimilating the new code I’d given it.

“Don’t care,” he said. “Should both be dead. Better late than never.”

“If we die here, they might never come back.”

“So bring them back quickly.”

“It doesn’t work like that!” I squirmed, but he was heavier than he looked. “You’ve had plenty of time to get your head around this.”

“Not enough.” He coughed, sprinkling me with phlegm.

“I can explain it so you’ll understand,” I said. The web was growing warm: waste heat from billions of nervous impulses radiating from the seed. “But not here.”

“Here,” he insisted with a vestige of his old vigour. “Now.”

I flailed for a concise explanation. “Batteries.”

Too concise. “Look — think about the difference between what we do and just dying like a normal person. You die when you’ve used up your life, right? Or when you forfeit what you’ve got left. But when we’re being dead, we’ve still got life left to live. The rest of our lives are still there in our bodies, waiting for us to start living them again. Our bodies are inert, but they aren’t corpses. They’ve got life in them. Like batteries.”

“They’re not batteries. They’re people.” He struggled to get out so many words in a row. “Billions of people, dead.”

“That’s why I had to do it on such a scale,” I said. “Eight billion in parallel means I only need about a minute from each of them. They won’t even notice the difference.”

He shook his head. “Never be enough. Not for you. You’ll use them up. Knew you wanted to live forever.”

“All this was meant to take care of itself. I never wanted to play wet nurse.” Could I hear bubbling far below, or was I just expecting to? “Look, maybe it’s worked out better for everyone this way. You black out, wake up the next moment, subjectively, and suddenly the world’s a better place.”

“That’s the point!” My fists clenched and unclenched. “They don’t have to live through this bit. They just get to reap the rewards.”

He bent closer, leering, bathing me in his rotten breath. “Taste the fruit yourself, you said —”

I tapped the bridge of his nose with my forehead. He gasped, more in surprise than pain, and I bucked him off. The stunt damaged my neck and back at least as badly as his nose. I creaked to my feet as he rolled towards the wall, clutching his face. A standing jump off the springy web got me into the coral rafters. After a few seconds’ upward scramble, I risked a downward glance. The Nine-Century Sage was hard on my heels, and an upwelling of steaming nutrient soup hard on his.

As I ascended into the maw of the storm, I bared my teeth in triumph. The summit, and my glider, were climbing into the clouds. Tor Galileo was growing again.

M. J. Starling is a self-diagnosed hypochondriac and writer. His short fiction has previously been published in Reflection’s Edge.