“I come from the fuutuuure,” the man said, waving his hand broadly, “and I’m here to help.”

Zeke stepped out of the English building and smacked himself in the forehead, trying to dislodge the image of his professor’s lustrous black hair cascading down her flawless neck.

“If only she were twenty years younger,” he sighed.

With a crackle of electricity, a dark hole opened up in the sky in front of him, rimmed with sizzling blue energy. A human figure toppled through it, its scream cut short by the thud and rustle of a rough landing in a nearby bush.

“Son of a bitch!” A young man climbed out, yelping as he navigated the thorns. He was clean-shaven with impeccably cropped blond hair and wore a suit and tie that looked brand-new, but about forty years out of date. 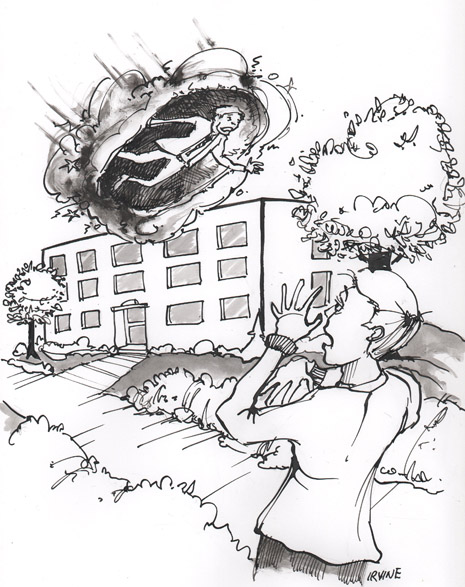 “You fell out of the sky,” Zeke said.

“I come from the fuutuuure,” the man said, waving his hand broadly, “and I’m here to help.”

Zeke would normally have demanded evidence that he was really from the future, but doubted he could produce anything that would top falling out of a hole in the sky. The man held out a business card featuring two suggestive female silhouettes. Zeke took it and read the text out loud.

“Get it, chief?” Billy asked, prodding Zeke with an elbow.

“Au contraire, my friend. Did you not, only a few minutes ago, wish that a particular woman were ‘only twenty years younger’?”

“How did you know that?”

“I just Googled the space-time continuum for every instance of the phrase ‘if only she were X years younger.’”

“Are you saying you could actually make her twenty years younger?”

“Don’t be ridiculous,” Billy said. “I’m saying I can take you back in time twenty years, so you can get with her when it’s not creepy.”

“I don’t know …” Hole in the sky notwithstanding, Zeke was still on guard for the reveal. Any moment, his friends could jump out of the bushes and this whole ordeal would be on YouTube within the hour.

Billy pressed a button on a small hand-held device. Another portal opened up in front of them, an inky black void in the middle of campus. “Why don’t you come with me, and I’ll show you Time Travel Central?”

After a few blurry moments of blackness, Zeke stumbled into a softly lit room. The walls and ceiling were bright white and decorated with artifacts from dozens of civilizations. There was a Roman centurion’s armour and an Aztec headdress. A shiny one-piece jumpsuit that seemed to be stitched together from space blankets. An Atari. Besides those, the room was sparsely furnished with only a computer terminal at one end and a clean worktable at the other.

“Still can’t get the hang of that,” Billy muttered as he got up from where he’d fallen on the floor. “Well, this is where the magic happens. What do you think?”

“I guess I believe you,” Zeke said. “But I doubt I could afford to pay you much.”

“That’s the beauty of time travel, my friend. Compound interest. All I need from you is a flat one hundred dollars. Give that a couple of centuries in the bank, and it’s paydirt.”

“Then couldn’t you just go back and invest your own money?”

“You’d think that, wouldn’t you? But it turns out the Galactic Temporal Police can be a real buzzkill. I’ve got to keep this all on the down-low, you see? But that’s not really your concern. Are you in?”

Zeke thought about it for a moment. “I don’t know. I’m not sure I could live in the nineties. Have you heard their music?”

“Chief, chief,” Billy said, putting his arm around Zeke reassuringly. “You know what my motto is? ‘You don’t go to stay; you just go to play.’ Just hit it and quit it, like I did with Anne Boleyn.”

“Great!” Billy cried, sliding onto his desk chair and starting up the computer. “First off, we need some basic information. What’s this girl’s name? What do you know about her?”

“Susan Kellerman,” Zeke said. “I know she went to Auburn.”

“Good stuff,” Billy said, typing furiously. He continued to take down whatever details Zeke could come up with for the next few minutes. Finally, he clicked a button to finish the document, and it disappeared with the crackle of another portal.

“Where did you send that?” asked Zeke.

“If you want to reliably seduce a woman,” Billy said, tapping on the computer screen to navigate menus, “you need to do your research. I contract it out to a teenage version of myself. I’m assured of confidentiality for my clients, and it beats the pants off of flipping burgers for a summer job, am I right, chief?”

Zeke didn’t answer. Billy searched the names on the files displayed on his screen. “Kellerman, Kellerman … here we go.” He expanded the screen and slid to the side to allow Zeke a closer look.

“Right here is everything you need to impress your soon-to-be-appropriately-aged crush. Likes, dislikes, turn-ons, favourite food, music, you name it. I was quite the little stalker, wasn’t I?”

“Okay, you just study that while I rustle up some acid-wash jeans and a leather jacket from the costume department. It’s show time!”

Nirvana assaulted Zeke at a few hundred decibels as he picked his way through discarded cans, Frisbees and passed-out undergraduates. He checked the room number written on his palm one more time and knocked. When the door opened, he pressed the button on the temporal distortion device in his pocket.

It was apparently one of Billy’s own inventions. The device slowed time down by about ten percent: not enough to throw up any real red flags, but enough to give the moment a subconsciously dramatic quality.

Susan Kellerman opened the door, looked at him with big brown eyes, and innocently tossed her long hair behind her head. It lingered in the air just a bit longer than it should have. Like in a shampoo commercial.

“Can I help you?” she asked in a hushed tone.

“You’re Susan, right?” Zeke pulled off his sunglasses and tried to look nonchalant as he leaned against the door jamb and chewed his gum obnoxiously. “You don’t know me, but I’ve heard a lot about you.” He looked her up and down with a sly grin. “And it looks like what I heard was true.” Zeke was terrified. He’d never been so bold when talking to a girl, but Billy swore by this kind of stuff.

It was Billy. He walked out from behind the door with an evil grin plastered on his face, and he slipped an arm around Susan’s waist. She didn’t flinch.

Zeke marched out of the portal and across the room like a storm front. Billy sat at his desk, dressed in full samurai armour, gingerly trying to eat a turkey club sandwich skewered on a katana.

“What are you talking about?”

“You totally cockblocked me! I show up at her room, and there you are. And you were … touching!”

“Well don’t blame me. It must have been some future Billy, and I certainly can’t be held responsible for what that guy does.”

“Well I want my money back.”

“No-can-do, chief. All sales are final. It says so on the business card.”

“Really?” Billy pulled out a card and looked it over. “Huh, you’re right. So I’ll go back and put it on there yesterday. Still counts.”

“Oh yeah? Then I’m keeping this!” Zeke waved the portal device in the air.

“Hey now,” Billy said, standing up and clanking in his armour. “That’s dangerous future technology. I don’t want the GTP riding me about losing one of those.”

With an angry grunt for emphasis, Zeke pressed the button and jumped through the portal before Billy could catch him.

“Hey there, beautiful,” Billy said, sidling up to the blond woman at the bar. “Can I buy you a drink?” Music throbbed around him, punctuated by flashing lights and gyrating figures on the dance floor. The woman started to reply, when the man on the other side of her turned around.

“She already has a drink,” Zeke said, tearing off his fake moustache. “It looks like you’re too late.”

“I’ve been following you all night,” Zeke said. “As soon as I saw you going home with a woman, I went back to the beginning of the night and got there first. Just like you did to me!”

“You mean,” Billy went on, ignoring her completely, “you’re using technology capable of tearing a hole in the space-time continuum to exact petty revenge?”

“Hey,” Zeke shouted over the music, “takes one to know one!”

Billy slammed his fist on the bar, fuming. “This means war!” he called out just before dashing outside.

Zeke turned quickly back to his date. “Nicetomeetyougottagocallyoulaterbye.”

Billy was nowhere to be seen. Just as he was about to go back inside, Zeke felt the hair on the back of his neck stand up with crackling electricity. He turned around and saw Billy, looking a few years older.

“Read ’em and weep, bitch!” he cried, opening his wallet and spilling a folded plastic sleeve, filled with photographs. “It took me over two years, but I managed to nail every one of your girlfriends, ever. Before you ever met them! How do you like them apples, huh?”

They stared at each other for a brief moment, then each turned around, opened up a new portal, and jumped through.

Zeke straightened his tie and waited nervously at the door, house-cleaning robot in hand. Occasional hoverboards breezed by, but he was too focused to notice. Finally the door opened, and a young woman looked back at him.

“Ma’am,” Zeke said. “I’d like to show you our new model of combination vacuuming-slash-sweeping-slash-mopping bot. I see you have children, and I’m sure they can make quite a mess sometimes. Do you mind if I come in and give you a demonstration?”

“No, not at all,” the woman said, almost breathlessly. “Did you … did it feel like time slowed down a bit just now?”

Zeke took her hand and gently raised it to his lips with a smile, glancing at the small boy playing on the floor. “A pleasure to meet you, Darla.”