The long sharp lines of the shadows, cast by every rock and grain of dust, grew as the edge of the sun narrowed to a sliver just over the horizon. Grey marvelled at the few bright spots, the pieces of white ground still touched by sunlight, as bright as midday without an atmosphere to block the rays, before turning to the nearly blank screen behind him.

The infrared image on the monitor of the moon’s surface, split by a horizontal line into the cool blue of the rock and the black of the void beyond, exploded with colour as a burst of red, orange and yellow appeared in the blackness. Grey cast his eyes outward from the monitor to the actual horizon. He couldn’t see it. But he could see where the machine blocked out the stars, creating a hole in the sky.

The technician to Grey’s right typed at inhuman speed, priming the computer for the order Grey was there to give. Despite her prestigious job on the base, she was young. If he didn’t know better Grey would have assumed, from her practised disdain of his authority, that she was still a student. He was happy to ignore her.

Unfortunately it was just at that moment that she finished her task. The technician sighed and stepped away from the keyboard as her monitor began counting down the distance from the base to the purpose of Grey’s mission. The readout indicated it was over two hundred and fifty kilometres out of range, but that number was falling quickly. The technician’s attention focused balefully on Grey. “It’s a crime to shut it down, you know.”

Grey shrugged. “I was told it’s not likely to succeed.”

The technician rolled her eyes. “I’m sure that’s what you heard.”

“Are you saying I’m wrong?”

“The room for error is non-existent,” she admitted. “But it isn’t based on chance, it’s based on precision.” After a moment’s thought, she added, “We were precise, and we can prove that if you just give us more time.”

“There are those words again,” Grey said. “More time.”

“That’s not fair. We’ve had setbacks sure, but we’ve been progressing. We’re almost there.”

“Almost there. Another old classic.”

“Besides,” the technician continued in desperation, “Yin is a miracle of engineering.”

“I’ll grant you that,” Grey said. “But there’s not much of a market in miracles. Honestly, it boggles the mind that you convinced us to bankroll it in the first place.”

The warmth on the infrared screen grew, blossoming into the metal skeleton and enormous wings of Yin. Grey wasn’t a scientist, but he had to admit that everything about the machine, from its structure to its location, was impressive. Yin was, essentially, a massive computer, the largest ever built. The sheer number of processes it went through at any one second generated more heat than could be dissipated quickly enough anywhere on the Earth’s surface. Even once the decision had been made to place it in the vacuum of space, the sun’s rays had posed a problem. A single beam of sunlight would be enough to instantly fry the delicate machinery. Finally it was given an orbit around the moon exactly twenty-seven days, seven hours and twelve minutes long, leaving it constantly in shadow.

There were no walkways on Yin, no inner rooms for repair crews to use. There was no habitable space; every inch of Yin was devoted to its function and the introduction of human heat would quickly melt anything it touched. The spindly form of the computer and the membranes stretching away from it to block the stars allowed heat to disperse immediately into the vacuum. Even so, it glowed an angry red on the infrared camera.

There was no room on board for even basic power generation. Instead, energy was harvested by a station on the opposite side of the moon, Yang, which was in perpetual sunlight, excepting the occasional lunar eclipse.

Yin rose, coming closer to the range of the base’s computers. The technician looked at Grey pleadingly.

“It’s really not my decision,” Grey said apologetically. He wasn’t really sorry. It made no difference to him. But it might make the technician feel better.

A slapping sound permeated into the small control room: footsteps. “Stop!” a man’s voice called down the hall as the footfalls grew louder.

Grey sighed, preparing himself for more complaints from researchers with no sense of practicality or economy. He glanced at the monitor. Yin was still over a hundred kilometres out of range. If it was close enough he would have shut it down already.

A man with greying hair and in desperate need of a shave burst into the control room. “You can’t do this!” he exclaimed. “You’ll kill us all!” 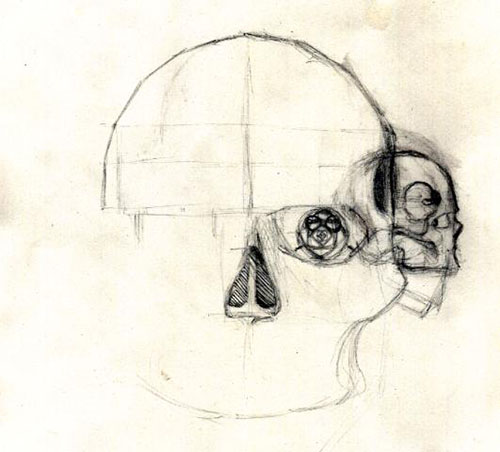 Grey hesitated. He couldn’t think of anything he’d been told in the briefing that would indicate that Yin was tied in to the base’s life support. Still, he recognized the man as the head of the team that had created Yin, Dr. Adam Bradley. Grey couldn’t dismiss Bradley’s objection without some token consideration. “What are you talking about?”

“Yin,” Bradley started, his chest heaving as he tried to catch his breath, “was created to predict the future by extrapolating from the past.”

“Yes,” Grey said. “It’s running a simulation of the Earth right now. We’re not completely out of the loop back at the Ministry.”

“The Earth,” Bradley nodded, “and everything of the universe that our technology can currently detect. We took the measurements the simulation is based on years ago and it’s just catching up to us now.”

“Because it has to run faster than real-time to be of any use,” the technician nodded. “Which is why I told him we can verify if it works in a few days,” she added pointedly.

“True, but not the point,” the man shook his head. “If the simulation is running accurately —”

“It is, so far,” the technician interjected again.

“Then the simulation also contains Yin.”

“Another Yin, running another simulation of the entire known universe. Within that universe, another Yin,” the man continued. “If we shut down the computer, then the simulation, and everything in it, stops existing.”

“It never existed in the first place,” Grey said, impatiently checking the monitor again — still fifty kilometres too far — but the technician’s eyes were growing wide.

“Exactly?” Grey said. “I don’t even know what you’re talking about.”

“The simulation being performed by Yin should be indistinguishable from reality. Everything within Yin’s memory will look exactly as if it was part of a universe that had existed for fourteen billion years, not a few weeks.”

“Dr. Bradley,” the technician said, her voice wavering. “What’s the probability that this is a simulation?”

“Approaching one. There can be only one ultimate universe, but infinite simulations.”

The technician stifled a gasp.

“Wait, wait, wait,” Grey held up a hand. “Approaching one? As in one hundred percent? You think this is a simulation?”

“But you can’t shut down a simulation from the inside.”

Grey’s eyes darted to the monitor. Yin had just entered the range of the base’s signal. He reached for the switch. “Well then,” he said.

“Not directly!” Bradley corrected himself, and Grey hesitated. “If we deactivate Yin, then that will be predicted by the simulation. That’s what will happen in every simulation, as well as the real universe.”

“Yes, but switching it off from the inside wouldn’t cause Yin to be shut down in the real universe,” the technician protested, “unless they were emulating Yin’s predictions.”

Bradley shook his head. “No one has to emulate anything. The simulations of us inside Yin will choose to do whatever we choose to do, because they have our same thoughts, desires, prejudices. Just as we have identical mental states to those who built the Yin we’re almost certainly inside. If we choose to shut down Yin in this universe, it is because we choose to shut it down in every universe.”

The technician became more distressed. “But that means there’s only one way this will end, based on starting conditions. What’s the point of arguing?”

“This argument is one of the results of the starting conditions,” Bradley shrugged. “We don’t have a choice.”

“So nothing we say has any effect on whether or not Yin gets shut down?”

“Of course it does!” Bradley scoffed. “But things can’t happen any way other than how they will happen.”

”You can tell that to the Financial Review Board,” Grey said. “I’m sure they’ll find it a huge relief.” Then he flipped the switch.